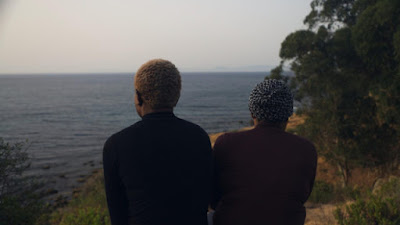 Filmmaker Ike Nnaebue makes his first documentary and retraces his trip from his home in Nigeria across Africa in search of a better life. Along the line he examines the dangers faced my those migrating for a better life as well as the exploring the reasons why someone would give up everything they knew to make a new life in another land.

In age where so many people are migrating in an effort to flee war this look at a different reason to be on the move is eye opening. This is a film that at least half of America needs to see. Living in a country where a good number of the people live in fear that immigrants are coming to get them this film makes it clear why people are so willing to move.

Make no mistake this is a bittersweet tale. Just because people are willing to go it doesn’t mean that they are going to make it. Circumstance, a lack of funds and other factors loom at every turn. Many people end up stuck along their way, unable to to go forward… ot go back either because of no cash or because of shame. Yes some stories seem like a repeat of others but that’s because there are only too many people trying to make a trip that can only end in a limited number of ways.

I really like this film a great deal. Director Nnaebue has made a film of incredible power. Not only is it s great examination of migration but it’s also a hell of a portrait of the people on screen. It’s a hell of a story where we move our seat closer to the screen because we want to hang out with everyone passing before us. My love of the film comes not from from the documenting of a journey, rather its from  Nanaebue’s instance on keeping the people and their humanity front and center. At no point does anyone disappear into the crown and become just a face or a cut out.  The result is a film that moves us.