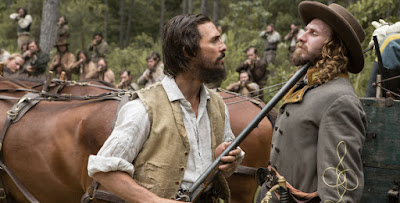 This is nominally the story of Newton Knight who set up the titled area in Mississippi in the middle of the American Civil War. As told here Knight was setting up a free state where all men and women could live freely while battling the confederacy.

Let me start by saying that even with its two plus hour running time the film is not wholly the story of Knight. Even if you do a quick reading on Knight it’s clear that what actually happened and who Knight was not something that could be easily encapsulated. What Knight’s actual motives were are also unclear with some accounts arguing he was a scoundrel others saying he wasn’t.

The film tells the story of Knight as he goes off to fight in the war. Unhappy with the treatment of the men he chafes at the abuse but is willing to put up with it because he feels there might be a reason. He last straw comes when a nephew shows up in camp and is going to be thrown In the meat grinder of battle. When his nephew is killed as he and Knight are trying to escape to safety, Knight deserts in order to bring the boy home. Becoming enraged by the treatment of the civilians he begins to fight back ending up being driven into the swamp before coming out and taking control of a swath of land.

Advertised perhaps a bit too much before it came out (it seemed like the film was running commercials for a good six months before it came out) I know the film suffered from people thinking the film had been released well before it actually showed up. Several people I know didn't go because they thought it was at the end its run and would be on cable shortly.

When the film came out the film reviews were mixed. Most writers I knew were not thrilled with it. Most regular film fans loved it and it s their love that made me want to see it.

An episodic epic covering several years time FREE STATE... is a wonderful film. Its a sprawling tale full of action and suspense. Its a kind of throw back to the epics of the 1950's and 60's. It is a grand historical adventure that's been refashioned for or time.

As much as I love the film my one problem with it is that it is perhaps too episodic and that it should be longer. While there is enough here to drive the story forward, the film does suffer from several plot line seeming rushed or not dealt with. While its okay because of the time jumping nature of the film I would have liked it if things had been allowed to play out a bit more.

Quibbles aside this is a great film and definitely worth a look.
Posted by Steve Kopian at September 24, 2017