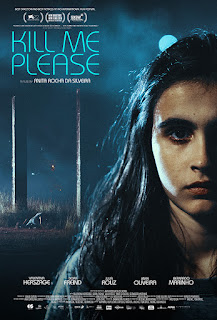 I saw KILL ME PLEASE last year when it played New Directors New Films. The story of a bunch of bored teens in Rio who ignore the fact that many of them are dying is incredibly pretentious. Its a film by someone who is largely not connected to reality- in other words a film that in no way mirrors reality.  I thought I had written up a full review but instead I find I only filed the following report in the curtain raiser:

... I did see  KILL ME PLEASE and I am not going to review the film. I am going to say that I agree with a friend who said his thought during most of the film was to chant the name of the film in the hope that the gods would take pity and end the pain. I also agree that the films final shot is fantastic, but it belongs in a film that it at least watchable.  KILL ME PLEASE is one of the worst (films I've seen).

KILL ME PLEASE opens today and is to be avoided at all costs.
Posted by Steve Kopian at September 01, 2017