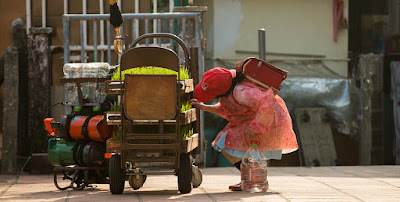 A film unlike any other by director Christopher Doyle it is unlike any film I've ever seen set in  or about Hong Kong. It is a mix of documentary and fiction described in the press materials as follows:


Which states it perfectly.

Unfortunately I am not sure that the film works completely.

Because it seems the story was cut from the footage shot a great deal of it doesn't hang together. You great a great image with a perfect voice over but at the same time going past the moment things don't quite work. Characters like the cute little girl in red is absolutely adorable but some of what she does just sort of there. Other characters never amount to much.

The biggest problem is pacing is also off  with the first third being a tough slog. It improves after that

The most interesting part of the film is the middle section on the Umbrella Movement. Owing to Doyle's eye and skill as a cinematographer we see life on the street in ways that the major news sources in the West never  revealed. This is Doyle working at the top of his game and it draws us in and makes us part of the Movement. There is much in this middle section to delight audiences and it's wonderful enough that despite the slow first part of the I'd strongly suggest you see film.

Actually since the film is by Christopher Doyle I'd recommend it with or without reservations. This is not idle worship of a director, rather its the respect for a master who makes films that are frequently imperfect but which contain so much intriguing material that they can not be dismissed. Give me a Doyle directed (or photographed) film over almost any other directors any day. He may make a film that doesn't work but it will be one that you can't shake and can't not think about for days (weeks after seeing the HONG KONG TRILOGY I'm still haunted by it). In point of fact Doyle is one the greatest directors working today and we simply do not have enough films from him. 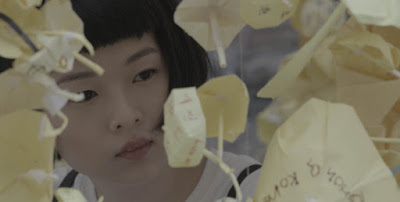