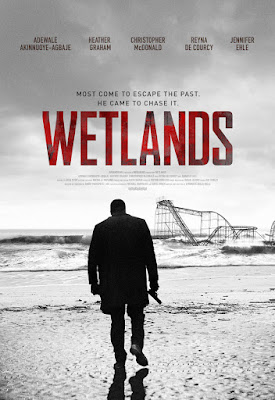 Adewale Akinnuoye-Agbaje plays a cop on the skids. His family broken he struggles to get his life back and manages to get assigned to a small police force outside Atlantic City  located in the wetlands. As he struggles to get things in order complications arise all around him

Less mystery than character study, WETLANDS is of interest for it's cast who are allowed to shine. Akinnuoye-Agbaje is great as the brooding cop who is desperate to put together a winning hand. Heather Graham is great at his ex-wife in a performance that reminds us how good an actress she can be with the right part. The big treat here is Christopher Mcdonald as Akinnuoye-Agbaj's partner. Forever cast as goofy comic villains he makes a wonderful dramatic turn that let you know then there is more to him than we thought.

A solid little film, it it took me a bit to shake off the notion that this was going to be a hard driving noir (the write up and poster seemed to imply that) and instead that it as just the story of one man. Once the film clicked with me I went with it and it's moody rambles. I was entertained and moved.

Definitely worth a look when the film opens Friday.
Posted by Steve Kopian at September 14, 2017