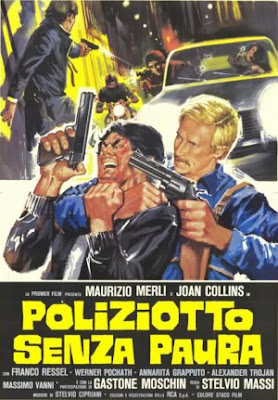 Odd ball Italian crime film has a private investigator chasing down the people responsible for a kidnapping and tricking out young girls.

Part smart ass PI film, part action thriller, part sex film and part social commentary MAGNUM COP is not by any stretch of the imagination a great film. I'm not sure it's a good film in any conventional sense. It is most assuredly entertaining because the film is such an all over the place mess of a film that moves along at a good enough clip you'll stay with it.

On the negative side the the film really makes no sense. Our hero really just thrashes about for 85 minutes until things come together and the mystery is solved.

On the plus side the film has a smart ass attitude, some great action and simply entertains.

Is it worth seeing? If you're not picky, absolutely.
Posted by Steve Kopian at September 03, 2017