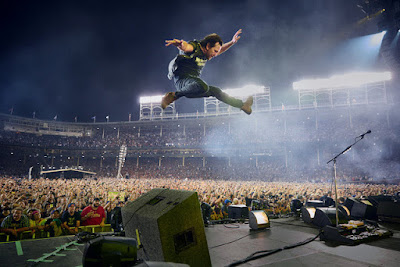 While this film is an absolute must see on the big screen thanks to its amazing cinematography(This is like the very best concert photography come to life), this is going to be tough slog after the first half hour for the non-Chicago Cubs or Pearl Jam fan

A beautifully shot film (this may very well be the best looking concert film I have ever seen) the film alternates between Eddie and friends talking about the Cubs and Chicago and some great music. The trouble is that unless you are a die hard Cubs fan there is a point where you turn off and stop caring. There is only so much gushing about the other guys team a fan can take. At a certain point I just wasn't interested. Additionally despite the best cinematic concert images I've ever seen the editing doesn't do anything to generate interest. Pearl Jam is not a big show group so there is no spectacle to watch and despite being glorious to look at the images never get inside the soul of anyone. Something is missing- a sense of life that the largely static images never convey.

This doesn't mean the LET'S PLAY TO is bad- it's not, it's simply that despite some glorious parts it never achieves the heights that it should be be as glorious a whole.

Recommended for Pearl Jam and Chicago Cubs fans as film. For everyone else think of it as a visual album.
Posted by Steve Kopian at September 26, 2017