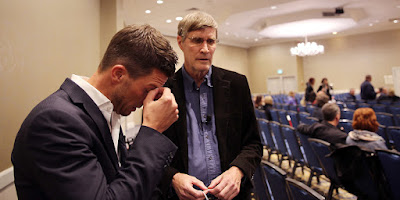 Twenty years ago filmmaker Matt Embry was diagnosed with Multiple Sclerosis. With the help of his physician father he determined a diet and workout regimen that seems to have kept him healthy and nowhere near declining. However Matt has realized over the last two decades that despite millions of dollars being spent on research nothing is getting done. The various research organizations refuse to share information, the doctors are woefully uniformed and everyone is out for the money and a such refuse to deal with the notion that the right diet and exercise can save lives To that end Embry has set out to make a film show people there is a hope and that there is a great deal of bullshit out there.

As a source of information for those suffering with MS we have to give Embry a ten out of ten for putting all out there. I'm pretty certain that his film will prolong lives when the information contained in it reaches the people who need it. Embry’s film reveals that there is a chance that that MS patients can lead longer healthie lives if they look outside the mainstream. Embry’s own results with diet and exercise speak volumes. As does the look at stem cell treatments that use the patient’s own cells to slow and even reverse the effects of the disease.

The film is also a vitally needed warning about the state of modern medicine where doctors, even specialists don’t know everything, how companies are working to stop anything they can’t make a buck on and how societies set up to help patients are simply self-serving money pits who really don’t want help anyone (they won’t share information that might help) and just want money. It’s a warning to any sort of patient that they have to fight for their rights and their own well-being.

As a one stop source of possibilities the film is to be commended if not celebrated. I really do think that the information in the film will make lives better

Unfortunately if you look at the film as anything more than an information container it is very messy. It’s severe enough that I think it needs a complete re-edit.

First while the film is structure as Embry’s journey. It is much too focused on Embry. He is on screen all the time which would be fine except the film seems bent toward him. He never disappears even when other people are talking. We watch his reaction to everything. He seemed to be the center. There was a point where I was wondering if the film was about MS in general or if it was simply Embry’s take on things. It doesn’t help that he is largely stoic or seems to have and seems more like a TV presenter instead of a man on a quest.

Worse the film is a jumble. The film has structural flaws and other issues that had me never fully engaging with the film.

The film makes a major mistake in that it jumps back and forth through time and repeats pieces with the result that the narrative thrust is lost. The film opens with Embry leaving a home in Hollywood and seems to be crying (it’s not quite clear). Why and what happened to cause it isn't explained for about a half an hour. Why he chose to start here is meaningless since we have no context. We later find out that the moment is when he is leaving the home an MS patient and he is overcome (?) by her recovery with stem cell treatment and her living conditions.

Embry makes jumble time repeatedly. Comments from his friends and family about his diagnosis are played once and then repeated in context later. There are frequent titles of time that bounce us forward and backward through time. The film barely starts and we barely have a footing when we are bounced nine months back in time. It doesn’t feel natural and it, like several other turns (large black and white titles announcing who everyone is, watching the camera crews stagger into locations) make it seem like Embry was trying to amp up the drama. Why he felt it was necessary eludes me since he has such a killer story at the center of the film.

To be honest I tuned out early. I stopped paying attention to anything having to do with Embry and just focused on the parts that didn’t have his nonsense and just listened to everything else. Even seeing he film a second time I drifted off.

The jumbled nature of the telling is going to kill the film because outside of those touched by MS I can’t really recommend the film.
Posted by Steve Kopian at September 15, 2017