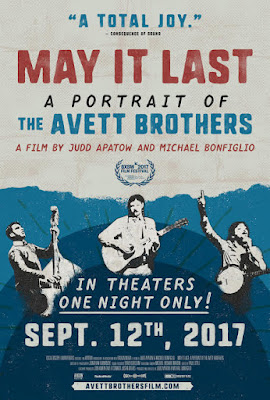 Playing one night only (Tuesday September 12) in theaters MAY IT LAST is something anyone who likes the Avetts should see on the big screen, especially if the theater has great sound. It is also something that anyone interested in the creative process should see since we get an incredible look at how the Avett's craft their songs,

Beginning and ending at Madison Square Garden as the boys and their band are about to take the stage for the first time in that historic arena, the film flashes back to them preparing to record the album True Sadness which has been their biggest hit to date and spawned their first number one song Ain't No Man. The film also fills in their stories both in life and music  since we see video of their metal days playing as Nemo.

What makes this film work as well as it does  is not so much the music, but rather the sense of family, both by blood and by choice. Of course there is the sense between Scott and Seth, but we also see the bonding between the rest of the band, and how it grew through chance meetings that brought in people that they would all stand by- such as when bassist Bob Crawford's daughter was diagnosed with a brain tumor and the entire band rallied around and stayed with Bob and his family. The stories are deeply touching. The film draws us in and makes us feel like family.

And then there is the music. Yes we get to hear much of the latest album in the film, but often its not the finished product. we get to watch as songs are written, versed are teased out and the instruments are arranged.  We come to realize how the Avett's songs are snapshots of their lives and how songs like Divorce Separation Blues capture such a specific moment that they could only exist in the instant they were written

Watching the film I just watched and listened and smiled. I loved it.

All I can say is I can't wait for the home video release so I can watch it over and over again.

The film plays Tuesday September 12 in theaters across the country and is highly recommended.

For a full list of theaters go to http://www.avettbrothersfilm.com/
Posted by Steve Kopian at September 07, 2017