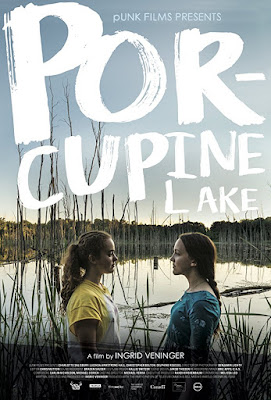 I am trying to deduce what my reaction to Porcupine Lake is.

It is most certainly a well-acted and well-made tale of a teenage girl coming of age and finding first love in a small town in Canada. The story of Bea and her friend Kate is beautifully done and it’s heartfelt tale that echoes of real world experience. It’s a good film with a well told story and on the most basic level it’s solid entertainment.

The problem for me is that the film isn’t all that exciting. It is, as I said, well told but it isn’t particularly compelling. It’s a film that is so low key it doesn’t generate much heat. It’s all at one level. The result was when the film ended I had no reaction- I felt the film was good but I had almost nothing to say about it.

As it stands now, this is a solid film that is very well done, but which will fade from your memory right after it’s finished screening.
Posted by Steve Kopian at September 10, 2017