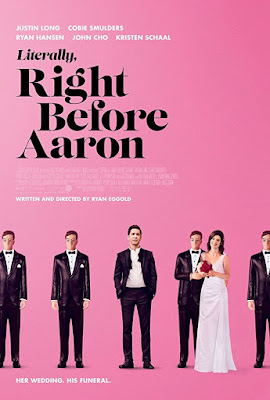 The is a repost of Arielas review from Tribeca

Allison(Colbie Smulders)and Adam(Justin Long) were together 8 years before they split up. Now less than 2 years later, Allison calls Adam and invites him to her wedding. He decides to go. Why? Who knows. He is still completely in love with her and the film shows him remembering times they had together throughout the film. He looks at photos of them together, he cries. But still goes to her dinner party, and then the wedding. His friend, played by John Cho, sets him up with the super quirky Kristen Schall, to take her as his date to the wedding.

It was refreshing in a way to see a guy who's broken hearted, because most movies seem to focus on the woman. The pain that Adam is in is so obvious. I kept wanting to yell "why are you doing this to yourself?!" It seemed so masochistic. I felt so sad for him and he was holding it together fairly well, I kept wondering, when is he going to break?

The film was good, it was sad more than anything(though I didn't actually cry). It's definitely not a must see
Posted by Steve Kopian at September 25, 2017