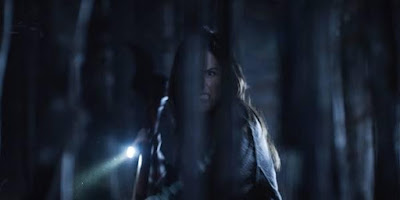 Justin Harding and Rob Brunner's is a nice little thriller.

The film has a Alana and her young son going to remote island to work on the choreography for her new show. The only other person on the island is an old gentleman neighbor. While working on her choreography in the woods Alana's son fins the weird body of an animal. Her neighbor says it's just a bat.

Good little thriller is not particularly scary but is completely entertaining as the scares are turned into knowing smiles. I really liked the film and enjoyed its compact little story.

You will forgive the lack of details and discussion but this is one of those films that will fall apart if you know too much.

Definitely recommended when the film play at Toronto September 10 and September 16
Posted by Steve Kopian at September 08, 2017