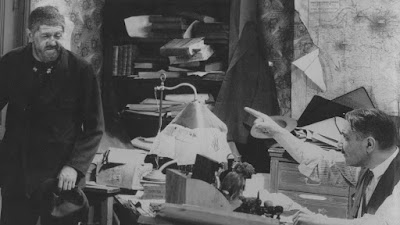 This piece was written several years ago as part of our occasional series looking at well known films and taking an opposing view point. With L'atalante playing Tuesday at the New York Film Festival I'm reposting it

L'atalante, the final film by director Jean Vigo before his untimely death, is hailed as a masterpiece of cinema.

Vigo left behind only three short films and this feature before dying. Typically all of his films are screened together, because the running time is around three hours and they make a nice evening's entertainment. The UK DVD that I have of the film has a second disc with the shorts on it.

L'atalante tells the story of a barge Captain who marries a young girl and then plies his trade up and down the river. Focusing on the couple and the crew it's the rocky story of a true romance.

The film met with mixed results upon its release and was cut up. Over the years there were attempts to put the film back together, and the film was restored to 89 minutes in 1990, and was then revised again in 2001.

I like the film. I just don't know why this is a frequent visitor on lists of the best films of all time. I've pondered the film ever since I saw it for the first time and I haven't yet figured out why it's great.

Certainly I have my beef with any number of the "classics" of cinema, but more times than not I can walk away from the film and at least understand why someone would argue that say Citizen Kane is a great film, even if I don't feel that way. Here I'm completely at a loss as to explain why it's a great film. I suppose it's all due to how someone connects or doesn't connect with the romance. I never really connected since I never saw what either person saw in the other. Yes, I'm coming from a different time and place, and how I look at romance and even relationships that become marriage is different, but beyond that I saw nothing. For me there was too much to take on faith. The thought that this film is highly rated only because Vigo died upon completion nags at me.

This isn't to say that L'atalante is a bad film; it's not, actually it's a good one...it's just not a great one. If there is anything that is great about the film it's the photography. Shot on location on the barge and the environs around it this film beautifully shows a time and a place. I love how the film looks and how it makes you feel how that you are there. Honestly I can see how people are influenced to want to chuck it all and go live on a barge.

Is this worth seeing? Yes. I don't think it's a bad film, and if you strip away the useless and uncalled for baggage of this being one of the greatest films of all time it's an enjoyable one. See it for itself and you'll have a good time; bringing anything else to the table will only serve to disappoint you.
Posted by Steve Kopian at September 30, 2017