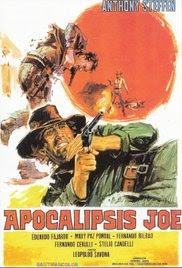 Shakespearean performer and vigilante Joe Clifford is rescued from jail by his aunt who informs him that he has inherited a gold mine. Going to check it out he finds the claim has been jumped by some really bad men who have not only taken over the mine but the town as well. Not heeding the advice to just get out of town Joe begins a one man war on the town.

Super action and characters are enhanced by a super score which manages to embrace what we think of as typical spaghetti western motifs and tur them into something that drives the film. The score drives the film and it makes things so much better.

Easily one of my favorite spaghetti westerns this film is an absolute blast. Its wonderfully defined characters telling a great story. Sure bits don’t make a hell of a lot of sense (Joe sets fire to a building to drive a bad guy out a window- but one he exits the building the fire is more or less ignored- despite it being right behind the characters) but it moves so fast and sure footedly that you won’t notice.

What an absolutely great film.
Posted by Steve Kopian at September 16, 2017