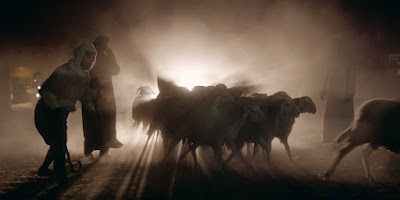 Destined for a long art hose run director Karim Sayad's OF SHEEP AND MEN will is a rambling slice of life that will thrill those ir clicks with and bore those it doesn't.

The film follows two men. The first is 16 year old Habib who is secretly training the ram his father bought to take part in contests with other rams. He knows that his father is planning on slaughtering the animal for the up coming holiday, however he wants to try and make him a champion before that.
The second is Samir who is looking to buy rams cheap to make a killing with the approaching Eid holiday.

Shot in such away that I wasn't sre if this was a documentary or fiction film OF SHEEP AND MEN sucks you in and carries you along. How connected you are to the film is going to depend on how you relate to the films shot from the hip style. Sayad  is clearly following events as it transpire which at times makes for some off looking shots and some long rambling passages as the single camera simply records what is happening without cutting away. Some of it works and some of it doesn't. The result is some it thrills and some of it doesn't.

I know that how the film was shot and put together is going to not work for some audiences who will find it too slow even at 75 minutes.

For those who like their looks at life raw and uncensored  this is a must. For all others proceed with caution.
Posted by Steve Kopian at September 11, 2017