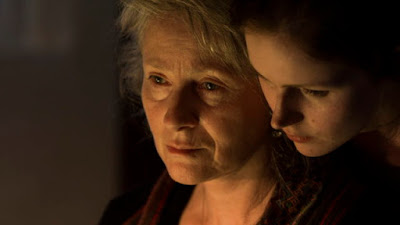 I saw SPOOR in connection with Fantasia about 8 weeks ago. It was a film that really liked for its first two thirds, but which kind of slid off the table in the final third as it had to both come to a conclusion and make a point. The result was a film that ultimately disappointed. Here is a repost of my brief Fantasia review.

Unfortunately there is a point somewhere along the way where the deliberate pacing and the shift to the film making a forceful point about the environment and animal rights (not to mention a reveal thats WTF) has the film go off the road like several of the cars in the film. While the accident isn't a total wreck the film is still off the road and it never manages to get back in time to have a satisfying finish.

SPOOR plays at the NYFF on Friday and Saturday. For tickets and more information go here.
Posted by Steve Kopian at September 28, 2017