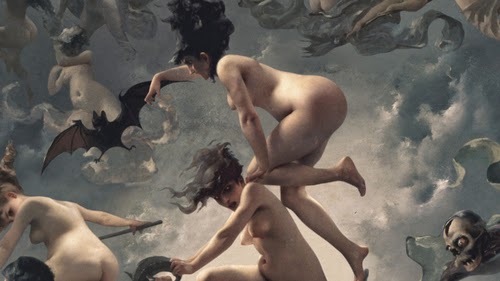 Some day I hope to see this on a truly huge screen because this film becomes more overpowering the more you see it and the bigger it is.

Rino Stefano Tagliafierro's meditation of life and death via the manipulation of images from classic paintings is haunting.  Running together all these well known images we now are forced to reconsider what they mean-an in many cases what they are really depicting. Yes some of the violent scenes are violent- but by putting them into slow motion we're suddenly forced to reconsider what the image really is.

And that is the strength of the film, its not simply that we are now seeing the images in motion, which is cool unto itself, rather the director is forcing us to consider things on multiple levels, first as I just mentioned we must consider what the paintings are really about, which is something I don't think even most scholars have ever conciously considered, and secondly we are asked to confront the cycle of life and death in a way that is out side the norm. What I mean by this is that by using these beautiful images and images that in many cases are well known we now have to ponder it as something other than the drab decaying notions of our lives. If these beautiful people and images cycle through, what does it say about us?

There is much to ponder.

I have seen this film a couple of time now and it moves me, nay it floors me every time.

Take this one down and watch it as big as you can.

ADDENDUM:
Some one posted the full 10 minute version on You Tube (May not be considered safe for work)