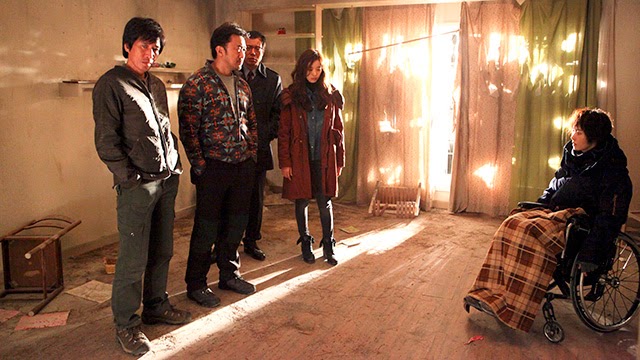 Woman whose family was killed by a serial killer and who herself was crippled in the attack blackmails several people into helping her get revenge. If they will help her she will give them what they need most, her organs.

Playing like a twisted cross between  Will Smith's Seven Pounds and a nasty and bleak Korean cinema revenge tale The Fives is a guilty pleasure.  Its a nasty spin on the revenge genre that carries you along because the set pieces work rather than the plot making any sense (it makes none). You have to check your brain at the door for this one, and assuming you can do so it's pretty good film.

From a technical stand point the film is top notch with great performances, great camera work and the right amount of nastiness. If there is any flaw beyond the silly plot it's that the pacing of the film is off and the film feels like it could use 20 minutes or so. Certainly had it been fster paced we wouldn't have had time to realize how loopy some of this is.

Reservations aside the film is worth a shot when it plays tonight at Fantasia. For tickets and more information go here.
Posted by Steve Kopian at August 06, 2014