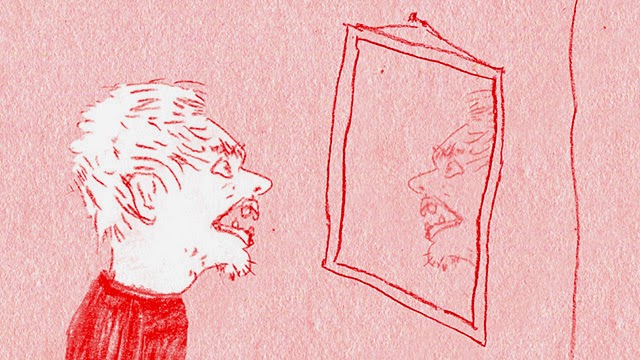 Shaun Clark's Lady And The Tooth is one of those truly twisted visions that are best suited to a short film. Its would never work any longer than it is since to go any longer would break it's carefully crafted spell. As much as it bothered me  and left me staring in disbelief at the screen, I was smiling all the way to the end .  I was smiling as well as kind of unnerved, wondering what sort of sick twisted pit of hell did this crawl out of and more importantly are there any more treasures like this that we can find?

The film is set in a weird backwoods community where teeth are an important commodity and are given to the towns folk by a giant head in the sky. I can't tell you any more than that since to do so would require me to tell you the story, a kind of boy meets girl story, involving teeth and  kidnapping...

What sets the film apart is the throw back style.It looks like the crayon drawings of a child come to life. The designs are largely grotesque and they are bothersome from the first frame. Equally disturbing is the color scheme, everything is pink, red and white. which makes things look like an exploded Valentine card.

I have no idea how to describe this film with out wrecking it. I would love to compare it a weird cross between a certain Christopher Lee film, mixed with some sort of backwoods horror film as filtered through the Mike Judge Beavis and Butthead style of animation, but that's selling the film short. That's trying to make the film fit into a box so that I can display it to you without showing it to you. The film is so much more and so uniquely its own thing.

This is the right sort of messed up. No really, this is. I need to mess people up with this film, I need to show it to people and make them wonder what the hell they just saw.

That's a huge rave by the way.

Mostly this disturbing little confection left me wondering how in the hell could you program any film to follow it.

I have no idea, if you want to find out the film plays tomorrow at Fantasia as part of the Outer Limits of Animation Program. For more information and details go to the film's festival web page here.