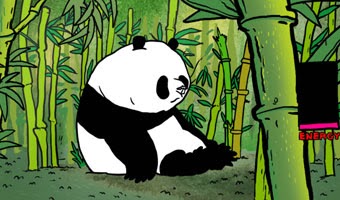 What if John K who made Ren and Stimpy made a bleakly cynical film about pandas?

Never mind that what would you get if you showed the evolution of pandas from the dawn of time into space and in the middle of it you included the most biting and damning condemnation of zoos, animal breeding programs and simply human intervention in the lives of animals?

All hail Matus Vizar, who has concocted one hell of a twistedly funny catch in your throat social commentary about man and animals. I love animals and I see the need for zoos, but after seeing this stab in the eye take on the abuse of animals in the name of the masses I have second thoughts,

Done in a gross, kind of low brow or underground style Vizar has made a film that is going to thrill those with a love for the truly grotesque and gross out everyone else. Its got sex and violence and other fun things all turned in such away to make you feel truly uncomfortable.

I can't praise this film enough.

The film is a masterpiece and the sort of thing that will win him friends even as it makes studio bosses wonder if they can turn him loose to do something more. I hope to hell he does more and he sends it my way since his black rose colored glasses are a welcome respite from the forced Disney sweetness we are forced to deal with in our animation.