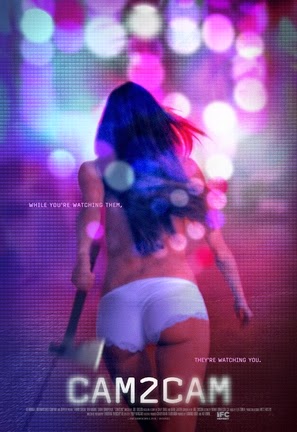 It's just a head! Who travels half way round the world for a fucking head!?!

CAM2CAM is half a good movie. Its a film that requires you to get through a wrong sort of cliched and over long first 20 minutes, then another 20 or 25 minutes of routine stuff before it gets exciting.  The problem is that by the time you get to the good stuff you may either no longer care what happens  or you'll have turned the film off. I stayed with the film to the end, but I realized somewhere about an hour in I was going to have see the film again because I had so disconnected with the film that I had stopped paying attention to details so by the time it was really good I was really lost.

The basic plot of the film, which doesn't kick in for 20 plus minutes, involves a Allie, a young backpacker, who goes to Thailand and encounters a bunch of tourists who are acting a bit odd. They are connected to a web site called CAM2CAM . The young woman has a secret of sorts too, she's looking for her sister who's gone missing (what happened is the first 20 minutes). How the tourists secrets and the search for the sister converge is the film.

I love films that make me wonder how the hell they got a release. To be honest I have no idea how anyone could really watch the first 20 minutes of CAM2CAM and decide to release it as anything other than as something just to fill the slot. The opening 20 minutes involves what happened to Allie's missing sister, she was trying to connect to someone on line for a little adult fun and instead runs head long into a psycho (and please tell me why it takes her so long to figure out something is wrong) . It is slowly paced, which would be fine, except that the film nails every cliche of this sort of film with suchabandon and a misplaced sense that it's doing something new that anyone who isn't a misogynist and who has only seen a few horror films is going to be bored.

The next bit of the film plays out as Allie wanders Thailand, meets some people and is seemingly stalked by a psycho. Its run of the mill stuff better handled than the opening 20 minutes. It also ends on a WTF moment that marks the start of the film getting interesting. To be honest it wasn't until this "hello" moment that I was even remotely interested in where the film was going. It was the point where I stopped wondering if I should turn the film off or keep going. I was going to keep going.

The second half of the film is pretty good, the problem is that it's struggle to get there. As much as I'd like to go back and see what I ignored the first time through, I never want to see the first 20 minutes again. I'll try the next time starting 20 minutes in and see what happens.

To be honest I'm wondering if the whole opening sequence was added in to make the film a salable length. It doesn't play like anything that follows and outside of setting up one character, and the missing sister, I don't know if it's needed. Then again I had my brain off for most of the first hour.

The second half of the film, details of which I won't reveal, is actually pretty good. It has some nice twists, some good lines and does some unexpected things, but at the same time it's a battle to get there.

I'm really torn about this film. I mean the first half is disposable then it gets good. The question is are you going to be able to make it to the good stuff and more importantly are you going to find that it's worth it. To be honest I can't make a suggestion because as I write this I'm still battling with that question myself. Whats worse is the very people who I'd recommend this film to, horror film lovers, are the ones who are going to be pulling their hair out at  how cliche the opening is, while non-horror fans may not feel its so bad.

Ultimately you're on you're own. Let me know what you think.
Posted by Steve Kopian at August 22, 2014