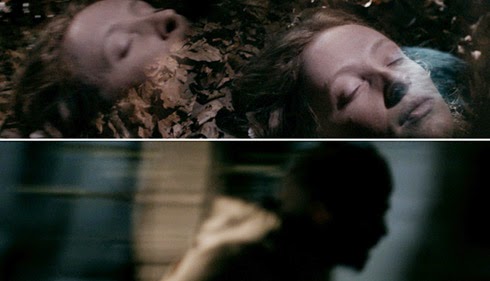 Very short short, it runs about 4 minutes  that plays like some sort of dark nightmare as a person traveling through the woods sees strange figures.

The danger of writing up a short that is not fully story driven and plays out more on a deeply psychological and visceral level rears its ugly head is saying too much. How do I write up a film that were you watching it in a darkened room or theater might very well kick you to the curb?

You can't do it without spoiling it for everyone. If I could embed  the short so you could see it before discussing it I would, but I can't. All I can say is  this is a wonderfully brick to the side of the head sort of film. Its one of those that make you want to see it again right away because it's like- Oh Shit what was that and why do I feel beaten up. I don't know but I'd like to investigate why.

If you get a chance to taste this demonic little blotter paper I highly suggest you do so since it will mess you up.
Posted by Steve Kopian at August 18, 2014