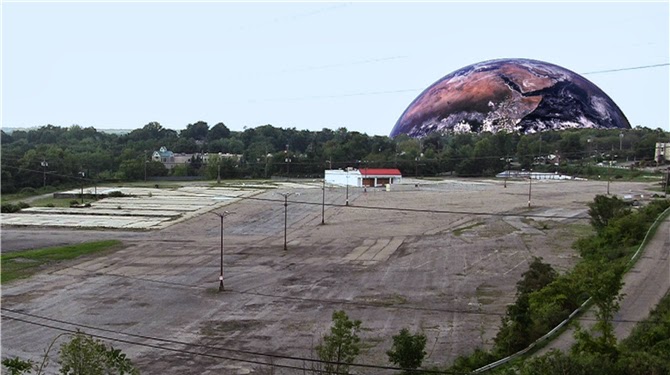 Trip between two towns in Pennsylvania one called Moon and the other Mars is presented like an anthropological study of a trip to the planets and of earth. A weird landscape-esque film that plays as a sort of  like the Robinson films of  Patrick Keiller or any film that takes something familiar and recreates it using carefully worded narration.

Cinematic trip to another mind space is an absolute wonder since it takes something familar and turns it into something you can ponder. Somehow the simulated on trips between Moon and Mars in a car makes you think about the world in a completletly new way. What I love about the film and the genre is that when it works its transports you to another place and another time, forcing you to fill in the blanks and thus rethink about what you’re seeing and reconsider life.

Here the film is nominally about the two towns and life in them but because we are shown the planets and because the film keeps mentioning Moon and Mars which kicks up all of the baggage associated with the planets we assume that the film is about life on the planets. It is in away, but largely its not and we’re forced to balance reality with the reality of the film combined with everything we bring to it. It’s a marvelous head game and after a couple of minutes you stop being here on earth and you travel into space which now looks exactly like here.

By the time you get to the end of the film you’ll believe the film’s reality and think you’ve traveled somewhere. Such is the magic of film in that it can create a reality that never existed and refashion the one that does.

This film is a blast, and when it was done I wanted to go again.

Track this film down
Posted by Steve Kopian at August 09, 2014