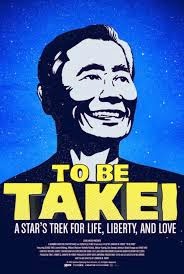 The first thing I learned about George Takei was that the name name is pronounced Tak “A” not Tak “I”. I’ve been wrong for almost 50 years.

The other thing I learned was that the man best known for playing Sulu on the original Star Trek is funny guy. I know if you’ve been following him on social media over the last few years that’s apparent, but seeing him in action it’s clear , he’s the sort of guy you want to hang out with.

To those of you who aren’t long time Star Trek fans, that may not have been something readily apparent. I remember going to a Star Trek Convention in the mid 1970’s with my brother and a friend and seeing Takei speak. It was one of the dullest most pompous things I’ve ever seen. All he did was talk about San Francisco politics and his attempt at running for office. It instantly turned me off to Takei since it colored my perception of him for decades. It wasn’t until things like his Howard Stern appearances and his coming out that I really thawed toward him.

To Be Takei is a loving and frankly hagiographic look at George Takei and his life. Don’t get me wrong, that’s not a bad thing since Takei and his husband are great guys. The film covers his whole life from his birth through the Japanese internment camps on through Star Trek and on to now. All the while we see how he largely refused to go the stereotypical Asian route (two Jerry Lewis films being the regretted exception) and influenced generations of Asian (and non-Asian) actors.

This film is a lot of fun. It has interviews with everyone who matters, his family, the Star Trek crew, Howard Stern, the actors he influenced, friends and of course the man himself. It’s blast.

Blast or no it’s not without some flaws, it’s clear that the time in the internment camps left their scars and sequences concerning them, while informative are bit too rigid and they grate against the jovialness of the rest of the film. The other problem is that the film kind of runs out of steam in the second half. It’s nothing serious, it’s just that the film feels like its got a double curse of too much of a good thing and running on a couple of minutes longer than it needs to be. I’m a fan. But there is a point where its too much ass kissing.

Too much or no- this is definitely worth your time. The film hits theaters Friday and is available on Direct TV VOD now.
Posted by Steve Kopian at August 19, 2014