One of the years best films, STARRED UP starts Wednesday 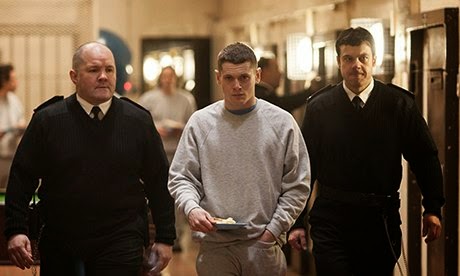 Starred Up is one of the best films of 2014. Its one of the few films that is so good that its place on the best of the year list is not up for discussion. It’s a film that you simply have to see.

We saw the film back at Tribeca and we’ve been raving about the film. Here’s Mondocurry’s take on the film:

Right from the outset UK film STARRED UP is a claustrophobic, panic inducing experience, beginning with a new inmates being processed and remaining in the structure’s decaying yellowish labyrinth of corridors, cramped cells, and sliding bars. While the atmosphere is as chilling as any previous dramas set in prisons where appalling acts of brutality are the norm, this film stands out more the restraint that is often shown by inmates whose every primal instinct to give in to rage is tested. That’s not to say that there aren’t fearsome confrontations; acts of violence arise that will make a chill run up your spine. Yet there is also a lot of conversation, often heated, and attempts to hash problems out as opposed to resorting to violence. The story does contain some fantastic and improbable turns of events so fans of recent trends of ultrarealistic drams might be a bit disappointed.

The result is a very satisfying drama with a powerful message and a story with enough thrills to move it forward dynamically. Director David Mackenzie and writer Jonathan Asser’s ability to achieve a few instances of humor in this most grim setting suggests a true storyteller’s gift, making the story far more memorable than if we were to just be bludgeoned by the same harsh truths over and over again.

We do not know what has landed 19 year old Eric a prison sentence, but his ferocity is rapidly established. After an assault on another inmate, with effects beyond those intended, Eric stages a showdown with a host of riot-gear clad guards, in which he manages to achieve the upper hand twice and put guards in the most precarious of situations in as many times. A resulting meeting between the warden, a high level administrator, and Oliver, a counselor volunteering to work at the prison on an experimental form of talk therapy with the prison’s more violent inmates, reveals that Eric has been ‘starred up,.’ This means he is a minor assigned to an adult facility because of the severity of his crimes. Begrudgingly the warden, being suspect of the treatment being utilized at all, agrees to allow Eric to join these sessions with the caveat of any incidents landing him in solitary confinement.

Meanwhile, there is the double-edged sword of Eric‘s father, Neville being a long incarcerated inmate in the same wing he is assigned to carrying out a life sentence. On the one hand, his father is established as a formidable prisoner, one to steer clear of, which ensures Eric a certain level of protection. On the other hand, being around each other brings up all kinds of psychic damage for the two, with both of their bottled up feelings being unleashed into violent confrontations that bring as much harm as healing, sometimes standing in direct opposition to Eric‘s therapy taking hold.

As Eric engages in these sessions with Oliver’s tightly bound group of prisoners, signs of progress appear. Yet the threat of conflict both within the group and outside of it are a constant threat to maintaining peace. Emotional power struggles arise around Neville’s sense of inadequacy as a father figure seeing Eric take to the members of this group, and an administration more eager to see -Oliver‘s progressive methods fail than succeed lurk in the background.

The setting is a crucial component of the film. Doors being slammed shut into very cramped spaces. Structurally interesting, the cells are organized in ascending levels, spiraling upward daring those on the lower levels to attempt to climb. Eric‘s regular transcendence of this boundary suggests he is unwilling to conform to expectations, his boldness making him a compelling figure, and one whose survival is a constant question mark.

An image of a turnstile’s slow creaking rotation til reaching a thudding halt appears a few times. It makes a simple yet powerful statement of endless frustrating cycles in prison systems like the ones we get a glimpse of here. Not recidivism, but progress at large, such Oliver’s attempts to reform rather than dehumanize prisoners, that is constantly blocked by those in control.

I also reviewed the film and my take is here.

The film opens Wednesday and should be at the top of your must see list.
Posted by Steve Kopian at August 25, 2014