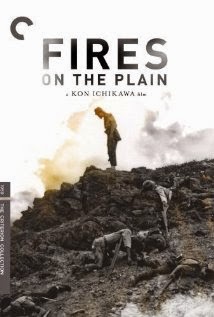 Spiritual opposite of director Kon Ichikawa‘s Burmese Harp, (see the review tomorrow)this is a slice of hell and man’s ultimate inhumanity. A black as night existential comedy/social commentary/horror film this is going to disturb many.

Set in the final days of the war the Japanese soldiers left on Leyte are truly on their own. There is no food, no ammo, nothing. They are left to march through the jungle toward some regrouping point that they never seem to reach. The men have been pushed past their limits and are now so broken as to be ghost of their former themselves. They will do anything to survive even if it means cannibalism.

Bleak doesn’t begin to describe it.

I read somewhere, maybe it was in the Criterion notes that the film is based on a Christian novel of hope and redemption, which had all the hope, redemption and Christian notions removed. This is mankind at his most animal…and worse.

And yet for all the horror the film is funny. The situations are of course dire, but the sheer ridiculousness of it all manages to produce some groaning laughter. You feel bad, but at the same time you still laugh.

I still haven’t worked out what it all means or if the film is supposed to be a dire warning as to where we’re going or if we’re just fucked. I’ll have to find the strength to see this film a few more times. Though to be perfectly honest this is a film that is intellectually a killer, but is so emotionally black you really can’t like it only admire it.

If you want to see what war will reduce us all to see this film.

(After I had programmed this I discovered for this spot that Fire on the Plains is screening on January 19 at Lincoln center as part of the New York Jewish Film Festival’s side bar called The War Against War. I highlyy recommend seeing this film and pretty much all the films at NYJFF  For more information on the screening and tickets go here.)
Posted by Steve Kopian at December 30, 2014