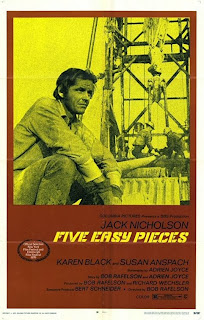 Five Easy Pieces is one of the few classics of the late 60’s and early 70’s that lived up to all the hype I had heard about it. Growing up, the film was always held out to be not only a great film but also the moment where Nicholson became Nicholson the great actor something that was cemented with Carnal Knowledge the next year. I saw Carnal Knowledge early into my obsession with film, and several times since then, but its never amount to much for me. Perhaps you had to live through what it was showing. Five Easy Pieces on the other hand was like watching lightning flash around in a bottle.

The plot of the film has Jack Nicholson working in the oil fields. When he gets word that his father is ill he returns home to his wealthy family with his girlfriend in tow. Sparks fly as the two worlds collide.

While Nicholson is a revelation, the film would never have worked if the script by Carole Eastman (Adrien Joyce) and based on a story by her and director Bob Rafaelson wasn't so good. Say what you will there doesn't seem to be any false note or anything artificial any of the dialog or in the trajectory of the plot. I mention the plot because many small films at the time would take a sudden and unexpected tragic turn as if out of left field. Here the tragedy  and discomfort is earned and almost to be expected from the first.

The big scene that everyone always talks about is the one in the diner where Nicholson simply wants toast and the waitress gives him hell about it since it's not on the menu. To be certain it's a big showy sequence but at the same time it doesn't do justice to any of the other moments in the film. Yea it's Jack being Jack, but it wouldn't play as well if all the other scenes weren't so real and so carefully modulated, Without the rest of the film the explosion of rage would never have worked in context.

I like Five Easy Pieces a great deal. To me it's the best of the mini golden age of American film that ran from say Bonnie and Clyde to The Godfather. This Golden Age was the flowering of a number of great filmmakers, Rafaelson, Mike Nichols, Coppola, Hopper, Altman and others. These guys and girls changed movies in the 70's and 80's. The problem is that as shattering as many of their films at the time were, many don't hold up quite as well any more. Four star  films are now three star ones. Probably the worst of the bunch now is Dennis Hopper's Easy Rider which has dated. Five Easy Pieces hasn't dated. Yes, the film is very much of the time it was made, but the underlying family and personal discord is still very real. This crap is still happening and people are still doing the same things now.

If you've never seen Five Easy Pieces you should. Forget who's in it forget that it's 40 plus years old and just see it because it's a damn good film.
Posted by Steve Kopian at December 27, 2014