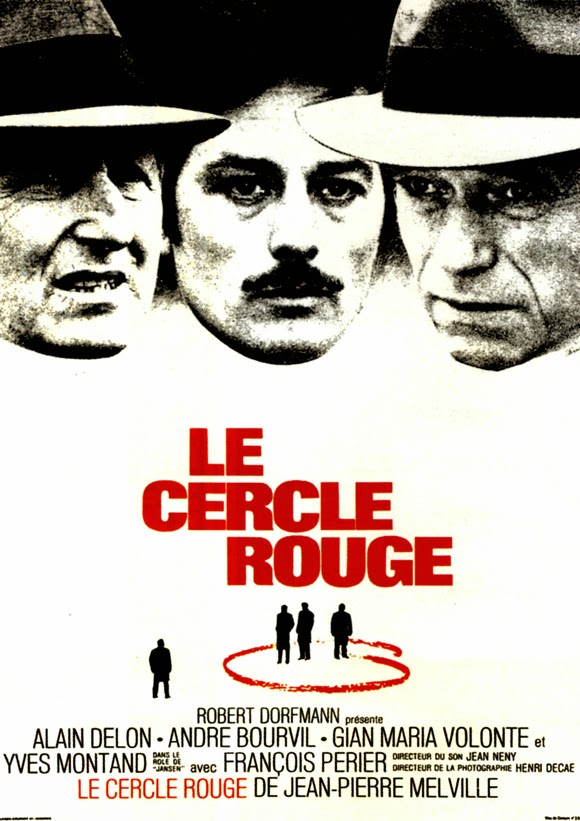 The Red Circle eludes me.

Several years ago I had been told about this great film The Red Circle about several crooks involved in a heist and the cops who pursued them. It was in the opinion of many one of, if not the best crime film ever made. It was a must see film. The trouble was it was damn near impossible to see in the US, it was like several of its directors films neglected in the US.

In the days before the internet finding a film from overseas could be a real struggle. You’d have to luck into finding it, or scour magazines for collectors who might have an ad or try and talk someone into putting you in contact with a friend of a friend…. It was a hassle and a half. Occasionally you’d luck onto a place like the now defunct Video Search of Miami which had movies from all over the globe. When you’d find a place like that it would open up your horizons wider than you ever thought possible.

It was through Video Search that I obtained a copy of The Red Circle. They came up with a copy a couple of months before the film hit theaters in a restored rerelease. I ordered the copy and as I am prone to do, I sat on the copy for a while. I then pulled the film out one day and started watching it. An hour in I was loving the film so much I stopped it. I knew I was going to be interrupted before the end and I didn’t want to do that so I stopped it, figuring I would go back to it in a day or so with a big box of popcorn and no chance of being interrupted.

Months passed. The theatrical release came…and went. Criterion announced it’s release, and somewhere close to when Criterion putting out it’s special edition came out I grabbed my Video Search DVD, got some popcorn and soda, popped the disc into the DVD player and settled into the film.

A glorious hour passed and I was in heaven…

…and then it all went wrong. This wonderfully crafted crime film of police and criminal cat and mouse devolved into a weird macho tale where characters started to do things because they were men and that’s what men do. It ceased in my eyes to make a great deal of sense. Why did they go through with everything when they knew it was going to end badly? It made no sense to me.  Somewhere in the final hour the film was lost to me.

How could people call this a great film when the plot kind of goes off the rails ? I don't know.

The question of why people regard the film as great has eluded me on the three or four screenings I've had of the film. Yes it looks great, yes it wonderfully acted, but the plot makes no real sense, people don't do the things they do here except in things with literary pretensions.

Don’t get me wrong it’s not a bad film, it’s just not the greatest crime film.

Is it worth seeing? Absolutely, if nothing else the first half of this film is as close to a perfect crime film as you can find. Its just that the second half isn't what it should be. Perhaps if the first half wasn't as good as it is i would have liked it more.

Worth trying, just keep the expectations reined in
Posted by Steve Kopian at December 17, 2014