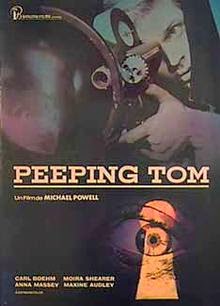 The argument between many film people is which is the better film Hitchcock’s Psycho or Michael Powell's Peeping Tom? Both films came out in the same year and both films altered the way the people who saw them see horror/thrillers. Clearly Psycho is the more seen of the two films but Peeping Tom has it’s champions

Full disclosure I am not a fan of Peeping Tom’s director Micael Powell. I don’t like the feel of pretty much every one of his films. I will go so far as to add that I hate The Red Shoes. Frankly I don’t get Powell’s films. I keep returning to them and keep being underwhelmed.

I am probably most mixed about Peeping Tom. The story of a twisted individual warped by his childhood and an now killing women so he can film their terror as an experiment is messed up. Carl Boehm‘s Mark Lewis is a severely disturbed individual, in many ways worse than Norman Bates. I love that the film puts you into his warped headspace, but at the same time it’s so out there that the reaction is to retreat and instantly turn away from it. Unless you want to be messed up or doing an academic paper you generally don’t watch Peeping Tom a second time.

I don’t watch Peeping Tom except when intrigued by a piece I read on it. I don’t want to go there.

It’s a feeling that’s shared by many people. Including the studio who produced it who kind of shuttled it away from sight and walked away from Powell since they couldn’t believe such a nice man made such a sick film.

Taking a hard look at the film I’m left to ponder if the film didn’t fall out of favor, if it didn’t become a minor cause celeb in some quarters and if it wasn’t hard to see (I know it was difficult to see for years because few TV stations ever ran it, nor did many revival theaters) would the film have garnered the acclaim?

I don’t know. I do think it is a good film, I do think on some level the disease the film creates in the viewed as a sign of greatness, but I don’t know if its all great. The psychology seems a bit pat. Sure I’m looking back after 54 years, but Mark Lewis really isn’t that far removed from most cinematic nut jobs.
Posted by Steve Kopian at December 25, 2014