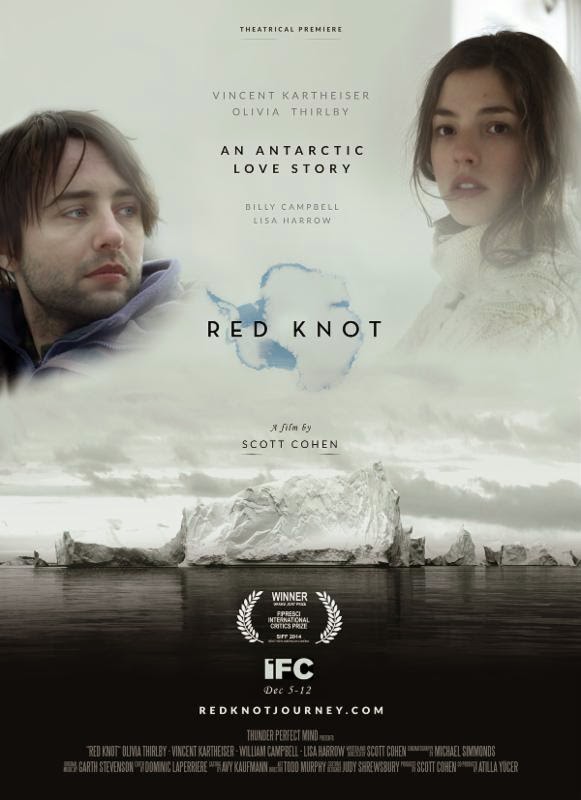 A young married couple decides to take their belated honeymoon on a research ship heading for Antarctica. However all is not as well as one would think with the pair and as they get closer and closer to their destination the cracks begin to show and secrets are revealed.

If any film could be said to get a huge boost from it's setting it's RED KNOT, a film set in Antarctica. That statement is not meant to be a knock against the film, only to be a statement of fact since the film without it would come across as a run of the mill relationship drama. However the setting adds a dimension that might otherwise be missing-adding not only to the film as a viewing experience but also adding to the emotional and mental landscape of the characters.

Actually to be perfectly honest the imagery is so over whelming and the sense of being on the ship and on the frozen continent is so strong that it pushes the central story aside. I say this because three hours after seeing the film I returned to the lap top to write the film up and had very little to say outside of it being good. No that's not true I found all I had to say was that its really good film but one where the you'll remember the landscape more than the film.

Kind of shocked, I went back and rewatched the film. It is a good film. Its well written, well played, with a kick ass score and a haunting ending-but damn it looks incredible. You really haven't seen a film that looks like this. Frankly the film is so spectacular that you really need to rush out when the film opens Friday at the IFC Center in New York to see it.
Posted by Steve Kopian at December 03, 2014