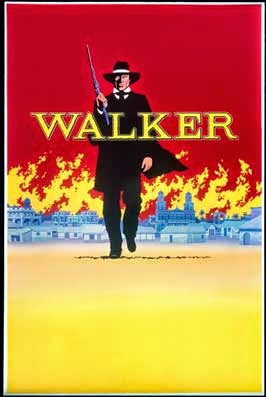 If anyone ever wants to derail their career all they need do is take a page out of Alex Cox’s playbook and follow up a cult classic (Repoman) with a head scratcher in your face political film. While that may go over well in some film communities, it’s the kiss of death in the US, more so when you attack the sitting grand poobah. Cox’s Walker confused the hell out of everyone and despite a great deal of talk before it was released in many corners of the film community it sank like a mafia informer with cement shoes.

The film tells the story of William Walker (Ed Harris) who in the middle of the 19th century wandered into Nicaragua, at the behest of several American robber Barons, and took over the country. All was fine for a while until the natives got restless, the support dried up and Walker was left to fend for himself.

Made at a time when the Reagan White House was farting around in Central America, and Nicaragua in particular, Cox went to great lengths to hammer home the parallels between the original American mis-adventure and the then current one. People read Time Magazine with cover stories on Reagan’s incursion, BMW’s drive down the road past horse drawn carriages and modern items and references abound. It makes for jarring viewing that on the first time through can be rather distracting. Yea it’s a bold political move, the cinematic equivalent of speaking in Reagan’s eye, but at the same time the film never connects with the heart and remains a purely intellectual exercise.

Seeing the film back in the day I was amused by the references but pondered why Cox bothered since the Walker story is without the prodding a cautionary tale, more so if you had even the smallest knowledge of the then current events. Seeing the film recently again for the first time in a 5 or so years I was struck by a couple of things. First the political rhetoric is quaint now. Frankly it was quaint when it was made but now, almost 30 years on, it really is quaint. It’s so quaint that you kind of can’t believe adults many years past film school would do. Didn’t they realize it wasn’t going to age well? Yea I know Cox was too pissed to care, but still seriously, the film is dated because of it.

The other thing that is weirdly refreshing is that the film, divorced of the political BS, the film is pretty good. No it’s not perfect but the tory of Walker’s take over a country is pretty good on its own terms.
Posted by Steve Kopian at December 16, 2014