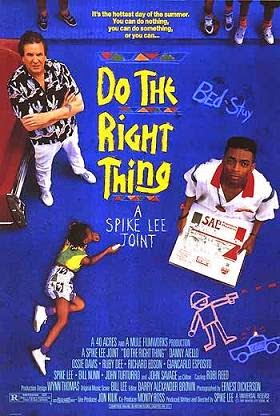 A day in the life of a neighborhood in Bed Stuy New York on one of the hottest days of the year, focused around a pizza parlor, its Italian owner, his sons, and the African Americans that live in the neighborhood and work in the restaurant.

This film has always vexed me. I love say 90% of the film. Up until the riot the film is a glorious calling card for Spike Lee and what he can do cinematically. Its full of all the Spike Lee-isms that have actually entered into our cultural consciousness. Things like his gliding shots are regularly riffed on by other filmmakers and made fun of by Saturday Night Live. It has great dialog, great characters and a wonderful sense of life. It’s an on target examination of relationships within a depressed neighborhood.

The problem for me is that there is a point late in the film, where a fed up Mookie (played by Spike Lee) walks over to the Pizza place , picks up a trash can and throws it through the front window. Intellectually the moment makes sense, it’s Mookie’s breaking point for all the BS his bosses have put him through, but at the same time emotionally its fake. I’ve seen the film any number of times and that single act cuts the legs out from under the film for me. The problem is that the act, within the context of the film, makes no sense. What triggers it really? Seriously give me an answer emotionally why it’s right. I don’t know if you can. I’ve had numerous people try to argue for it to make sense , but I’m not convinced. The problem is Mookie is an outsider and observer for so much of the film, that when he finally does something it just doesn’t feel right. For me it’s as if Lee needed it to happen, and it should happen, but Lee couldn’t get an emotional correct "reason" for doing it and then just did it anyway.

Of course the film ends on a totally BS note with Mookie and his boss making up. Really? I can’t see that happening since who would have their life’s work and livelihood destroyed and then turn to the person who did it and say it’s okay. I’m a forgiving guy but I’d at the very least call the cops on him, and at the worst put a pipe to the side of his head.