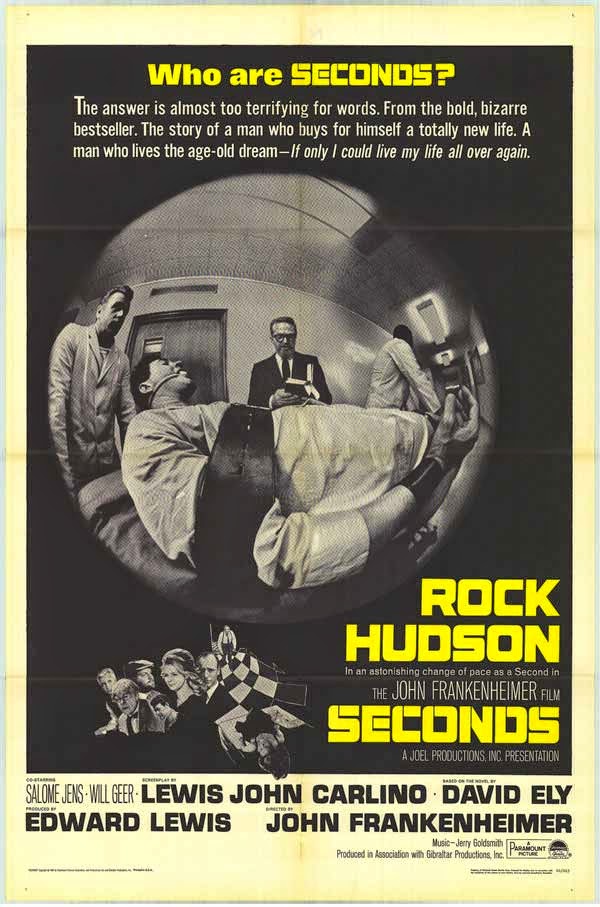 I should probably end the review there because that’s all I really can say about the film, but it doesn’t do the film justice.

Seconds truly unnerves me is probably a better statement. Actually I should add that I never ever want to see it again.

I first heard about John Frankenhiemer’s back in my video store days. We had one customer who was constantly looking for the most obscure, most off the wall films from around the world you ever heard of. He was looking for lost , misplaced and unknown films from around the world. The video store I worked at had eight or so stores and the stock was exchanged between stores so Mr Chapas had us bringing 12 to 15 films a week from other stores, he also had us making calls to see if we could find the films he wanted on VHS tape from our distributors. . If you want to know where by desire to find films came from its from Mr Chapas, who every weekend would take home stacks of films and devour them. Once started waxing poetic about the films I started to take home whatever he had brought to our store.

One of the films that Chapas waxed poetic about was Seconds. The film he assured me was so disturbing that not only did it bomb at the box office, despite starring Rock Hudson, it ended up buried by the studio who refused to ever rerelease it. I never really expected to see it, but one day the film showed up late at night on some out of town cable station. Needless to say I taped it, as did everyone else who had heard the stories about this weird little film.

The plot of the film has John Randolph becoming bored with his life. He desperately wants to get out but doesn’t know how. He’s put in touch with the Seconds corporation. For a fee they will give him a new life with a new look, all he has to do is follow a few simple rules…Randolph jumps at the chance and after a brief procedure he wakes up looking like Rock Hudson. Despite things be great for a while Hudson begins to regret his new life and begins to ponder making another change…but that isn’t allowed.

I hate to say this but I, who loves horror films and disturbing stories, really doesn’t like this film. Its not because it’s bad, rather because the film creates a head space so dark I don’t want to do there. I mean that I don’t want to be there and I’ve only sporadically seen the film again after that first viewing simply to see if the film doesn’t give me the screaming yags. I don’t know what it is that disturbs me, I suppose it’s being set in a world a half step off from our own that does it. I can so see this happening…

I hate the way this film makes me feel which is why it’s a must see for anyone who wants their mind and emotions played with. It’s a truly great film and I never want to see it again Criterion edition or no.
Posted by Steve Kopian at December 19, 2014