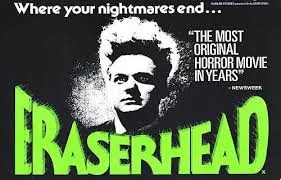 A dream of Dark and disturbing things

I don’t pretend to know what the film means. I’m not going to even guess, not because I’ll be wrong, more that I’ll be as right as anyone else. Eraserhead is a movie that is whatever you say it is.

I’m sure we all agree it’s dark and disturbing but I don’t know beyond that. I remember going to see it At the East Meadow Multiplex in the early 1980’s. I dropped by brother and his friends at a different theater showing Rocky Horror and I went down the road to see Lynch’s nightmare. The theater was a third to half full, most people sitting alone. The film was like watching someone eles nightmare. And it left me kind of staring into space. I went only once, all future viewings were on home video, once with my mom and dad.

To be honest the best way to see the film is as big as possible in a room as dark as possible. The dark world that Lynch creates needs to bleed off the screen to the world around you. This is a world just in the shadows… it needs to be connected to them. Also try and keep the comments to a minimum- you have to react to the film and not the comments of friends and family. If you’ve never seen the film big and in the dark, you’ve never seen it nor experienced it’s raw power

As for those of you who have never seen it…why the hell not? This is as influencial a film as they come. It’s a film that is a real cinematic experience- it forces you to react, to ponder and engage in ways that 99% of other filmsnever do.

Is it a good film? No idea but it’s a cinematic trip that everyone should experience at least once.
Posted by Steve Kopian at December 26, 2014