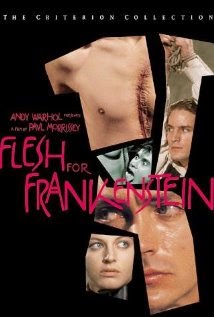 First of two subversion of the horror genre that were nominally presented by Andy Warhol (The other was Blood for Dracula). This retelling of the Frankenstein story was filmed in 3D which resulted with lots of body parts dripping into the audiences lap.

The plot has the baron and his sister living as husband and wife with their children in a castle. As the good doctor spends his days trying to assemble a super-race his wife runs around with the kids and trying to fill the boredom. As the doctor spends more time in the lab she hires a new servant to help her around the bedroom as well as the house.

A dry re-imaging of the Frankenstein story as a ghoulish TV sitcom and reflection of society the film is full of odd ball lines (including the infamous To Know death one must fuck life through the gall bladder), odd performances (what is heavily Brooklyn accented Joe Dallesandro doing among the East European peasants?), and ridiculing of mad scientist conventions (it really is so silly), that one maybe hard pressed to ever take a similar film seriously ever again. Actually one might have been hard pressed to take the genre seriously had the film been better, but its not. This is a very arch, much too dry, way too knowing film that presents itself as a film that's much too clever.

For years I had feelings toward the film because I took it as a serious horror film (many horror reference books treated it as a more serious endeavor than it is) so when I saw this during the 3D craze of the 1980's I was never sure if it was suppose to be funny or not. The result was I didn't think it was any good. Having the chance to sit down and watch the film on the Criterion DVD (sans 3D) now that I knew it was a satire I gave it another go.

Worth a look for those who want to see influential horror films or great cinematography, all others are advised to stay away.
Posted by Steve Kopian at December 12, 2014