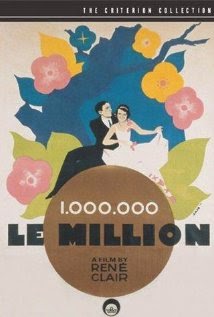 Rene Clair's groundbreaking musical. If you want to see where songs first drove a story this is the place. This is the story of a starving young artist who finds he's won the lottery just as his creditors come calling. Unfortunately his ticket is in his coat, which is in his girlfriends apartment and has been given to an on the run convict who then... oh but that would be telling.

This is a light and frothy story where much of the dialog is sung (most people think this didn't happen until Oklahoma or Andrew Lloyd Webber). Its the sort of movie that they don't make any more, and rarely did when they did. Its sound a film from the early days that plays like a movie from five or six years later. Clair moves his camera around in ways that not even Busby Berkeley was doing (though to be honest comparing the two film makers is unfair since Berkeley was doing essentially stage bound dance numbers and Clair was moving the camera through "the real world"). Its an amazing little movie. and its a charming movie that will just make you smile. Its just a fluffy piece of enjoyment.

I'm sorry I can't say more. Its just a nice little movie and thats really all you need to know.
Posted by Steve Kopian at December 22, 2014