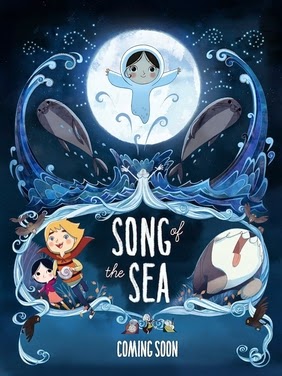 Lets get to the heart of the matter at the to SONG OF THE SEA is one of the best films of 2014.

Yea it that good.

The big stuff is out of the way so now I can talk about the joys of this great film.

SONG OF THE SEA tells the story of Ben. He's the son of a lighthouse keeper. On the night his sister Saoirse is born his mother disappears. Six years later there is a tension between brother and sister, made worse by her inability to talk and their father refusing to get over the "death" of his wife. A series of events transpire that take Ben and Saoirse far from the sea, thus imperiling not only their lives but the lives of all of the fairies and magical beings in the world since Saoirse is a selkie and until she can sing her song no one will be able to go home again. 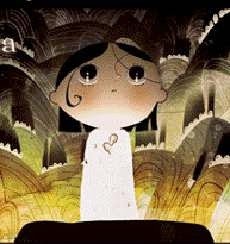 Just like Tomm Moore's first film BOOK OF KELLS, SONG OF THE SEA has it's own unique look. The designs are heavily influenced by Celtic designs but it's also infused with Moore and his teams own style. Think of it as UPA Celtic or some other melding of old and classic (animation) to become something new. I love the playfulness of many of the character designs. Chu the old English Sheep dog is magical as are most of the fairy folk.

At times the images will move you to tears. Never mind that the bittersweet story will break your heart and then heal it, the images alone will have your mouth hanging open as you watch some of the most beautiful images that have ever been put on screen. When Saoirse puts on her coat and goes swimming that first time I had tears streaming down my face- the simple childlike beauty of the selkie and the seals overwhelmed me with emotion.

I love that there is a complexity not only to the art but also to the story. For example there are various motifs through out the film such as circles that repeat  through out the film. There is a twinning of many characters as most really people have a mystical equivalent- the grandmother is the owl witch, the kids father is a grieving giant, the ferry driver is a hairy man where each strand of hair is a story. This is not just a simple quest story there is a great deal  going on. 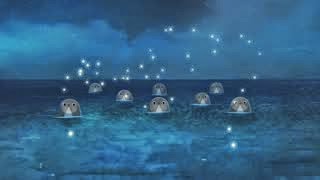 Moore needs to get a medal for not dumbing things down or not removing the darkness from his films. When I saw BOOK OF KELLS several children screamed at the advancing hordes, He defended the fright to some parents by saying that it wasn't that scary and besides life is like that. Here there isn't quite the blackness, but there is darkness. Grief hangs over the film. The loss of Ben and Saoirse's mother is an open wound. Their father drinks to forget. He does somethings so that history won't repeat- and which have dire consequences. Their grandmother is a bitch on wheels because she sees how the pain has affected the family and thinks she is helping by being stern and taking charge.

Indeed the theme of pain and loss and how we cope and seek to remove it is a thematic thread that runs through the film in ways that no recent American animated film has even dared to hint at. Equally out there is the question of what are we without emotion?

That's heady stuff in an adult film, never mind for one that is going to be sold for kids. That is not a knock only a statement of fact. Its a fact that I applaud since it makes Tomm Moore one of the rare animators in the world who trusts his audience, at what ever age, to be able to engage with what he's doing and not get upset.(Is it any wonder that GKids is releasing it in the US since they are the only company releasing animation I know not to dumb down and trust kids with big issues)

And while I'm at it Tomm Moore is a genius and he needs to stay away from Hollywood because his unique vision should never be corrupted. If he should ever have a film that fails I would rather it be because he misstepped rather than because the corporate bigwigs made changes- I'm sure it would still be ten times more interesting than a Hollywood success. If anyone wants to do the world a favor just give him as much money as he needs and get get the hell out of his way.

While in fairness I have to say that the film isn't perfect, there is one small blip that I won't get into,  I have to add that it's truly one of the best films of 2014. I completely understand why the film is being called the spoiler/wild card regarding the Oscar race for Best Animated Feature by anyone who has seen it because it is that good.

The film begins it's US release December 19 and should be high on everyone's must see list. 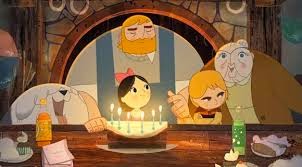