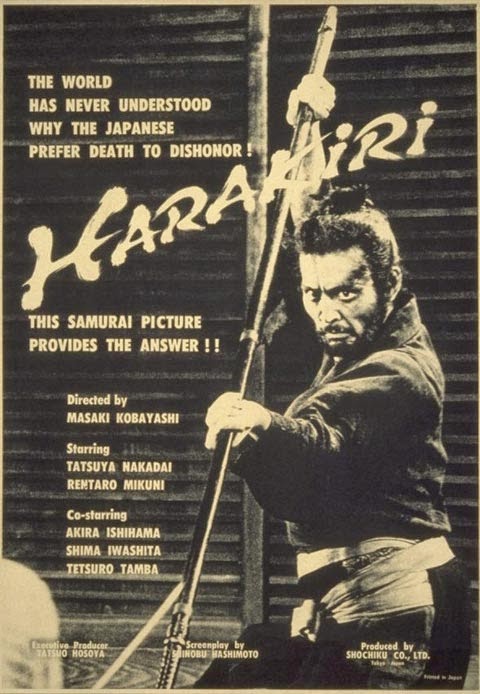 In the days after the break up of the great clans, when many samurai were left to fend for themselves an older samurai shows up at the headquarters of one of the remaining clans. He wants a place to commit suicide. They are weary of such requests since most of the men doing it are hoping to find a position instead of their end.  As a result of all of the requests, the clan has taken the stance that they will help the samurai's die. However as the old samurai prepares for his end, something seems off, something is a miss and when the time comes he explains why he's there...

Beautiful and depressing film that takes to task the samurai and Japanese notions of ideas of honor and proper behavior. It lays it all out neatly and clearly and you see how that sort of thinking lead to such terrible things such as the Second World War and the waste of the Kamikaze.

A stunningly beautiful black and white film, it's formal structure and almost theatrical feel make this something special- especially when the film shifts gears to become something much more real

I like how this version unfolds, as a straight forward narrative that flashes back to show you what brought on the events. Its deeply heartbreaking.

While the pacing of the Miike remake seems off, so that the film feels too long, this version, with an even more leisurely pace and longer running time feels right. If I had the choice between versions I would take this version over the remake.

Hailed as one of the great classics of cinema, the film is out in a wonderful edition from Criterion with bells and whistles which add to the understanding of the film.

If you 've never seen it you owe it to yourself and bite the bullet and do so.
Posted by Steve Kopian at December 08, 2014