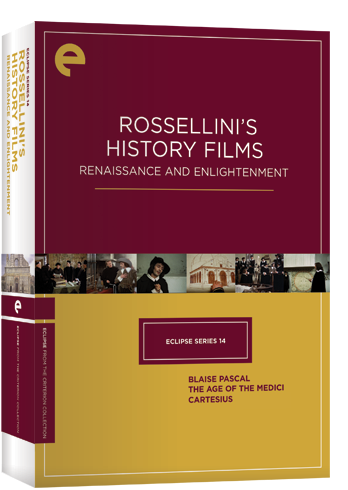 The historical films of Roberto Rossellini are an acquired taste, you are going to be either enraptured or driven mad by them. Criterion released THE TAKING OF POWER BY LOUIS XIV as a stand-alone feature and then released three more AGE OF MEDICI, CARTISEUS and BLAISE PASCAL,as an Eclipse box set (and there are several more in the series).

The short version of the story behind the films was that Rossellini, the great neo realist, decided that we should be making films to educate people and that the best way to do this was to make realistic films about the great minds and great events of history. He then went on to make a series of films on various people and subjects. Interest was lukewarm at best. He tried to spice things up by making AGE OF THE MEDICI in English with the hope that the subject matter and his name would interest PBS, but they passed on the film, which was then dubbed into Italian

This is one of those times where I’m not sure why I’m writing the film up. I mean it’s not a new release of part of festival coverage so I don’t have to post this, but at the same time it is a Criterion release and it is our month of Criterion. Also I’ve read some rapturous reviews of some of the films.

Personally I’m non-plused about the films. Its not the films are bad, they’re not, its just that they are so realistic, so slice of life that they are kind of dull. While I give Rossellini credit for trusting his audience to figure out who some people are, you have to kind of take away a few points when we are left a drift with no context. Who exactly are these people? Watching TAKING OF POWER... I was kind of enjoying the courtly discussions until I realized I had no idea who anyone was. It’s the same feeling I got with some of the other films in the Eclipse set, who are these people and why are they important. I’m willing to meet you half way, but this requires a bit of effort to really get out of it what Rossellini wants you to get out of it.

Actually the series of films kind of reminds me of Tom Stoppard’s Coast of Utopia plays which form a 9 hour epic drama involving Russian Philosophers in the mid-19th century. The problem is that unless you know who the actors are playing and what they are “famous” for the plays mean nothing Characters aren’t often addressed by their names so you have to use your Playbill and even then unless you know who the obscure people are you'll be going WTF. It’s a lot of people wandering around an Russian country house for 9 hours talking about petty stuff just like life. Critics were enraptured, the audiences were confused. I was annoyed

The Rosellini films are like that to various degrees. Some are clear as to whats going on, others you have to hunt around to find something.