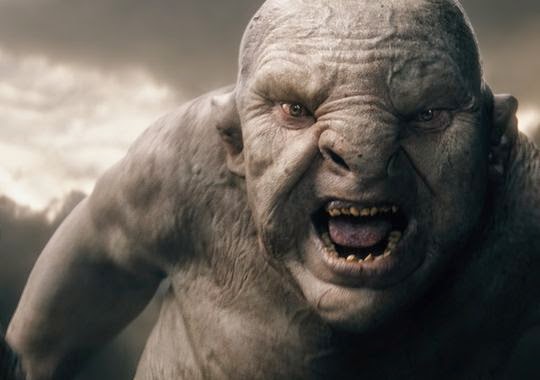 Peter Jackson’s tour of Middle Earth is complete. After 3 Lord of the Rings films the three Hobbit films are done. All that is left to do is for him to release the cash grab extended version of Battle of the Five Armies and maybe one day cut the films into one cut that removes all of the extra crap he added in so we’d have three films.

All that’s left is to take stock of what we’ve seen and then wait for the next thing to come along.

I’m not going to discuss the LOTR films. Taken together they are one of the greatest cinematic achievements ever. They are amazing.

The Hobbit films on the other hand are another story. For better or worse they are way too bloated to amount to much- though in their final hour they reveal what the films could have been (and might be if someone dared take some scissors to the films)

There are two major and one almost insurmountable problems with the Hobbit as a whole.

The first major one is the over length of the films. Peter Jackson added way too much into the films. Building new pieces from references in the appendices and elsewhere we get the appearances of various characters (Galadriel, Legolas, Elrond ect) that don’t appear in the Hobbit. These digressions tie the film to the LOTR films but at the same time the digressions are just that digressions. They add nothing to the story of Bilbo and his travels. They should never have been put in there. If you need proof watch BATTLE OF THE FIVE ARMIES and realize that when the film (the entire Hobbit saga) finally springs to life is when all of the extra bullshit is thrown out and the film settles down to tell the story that’s in the book (more or less) and focus squarely on the characters. Once we get back to Bilbo and Thorin and even Tuariel, the film snaps to life.

Additionally  the over length of several sequences drags things out -particularly in the DESOLATION OF SMAUG where we get thrill rides (the escape via barrels) instead of plot movement. Jackson and company blew the sequences up to fill time and it shows as the films grind to a halt despite the seeming forward motion.

The second major problem is the that  much of the film looks exactly what it is, namely  computer generated. Look at the compositing with the background- people are real the backgrounds aren’t. They look like Alan Lee paintings because they are works of art. Many of the monsters look to be not real but CGI game creations. Worse much of the make-up looks fake or at the very least wildly uneven with some of the dwarves looking down right bad.

Actually the biggest thing wrong with the entire Hobbit and the one thing that pretty much kills the trilogy is that the films are never about anything until the second half of the second film or maybe even the third film. What I mean by this is that while half the trilogy is about getting to the mountains there are no characters or events that mean anything other than the travel. Nothing about what happens means anything. We are simply traveling from point A to point B. It isn’t until we get to Laketown and we meet Bard and his family and everyone interacts we don’t really have anything other than motion. Finally in the town, soon to be destroyed by the dragon, do we get anything we can care about or hook onto. Here at last there are character and not cut outs.  Its here that all of the character interactions start to come together. Frankly until the dragon leaves none of the characters especially the dwarves don’t have much to differentiate them from each other. Finally when Thorin begins to go mad does the film begin to click.

Once Thorin goes mad and the film becomes about greed and lost honor and everything else. Until the final hour the film is about nothing. There is no theme. There are no undercurrents there is only motion. That’s fine for a 90 minute action film but not an 8 hour 3 part story. Until that happens there is no reason to connect to the characters or their stories.

To be fair I could argue that had this say been either a 5 hour film or a five hour two part film you could pull all the themes together in the last hour but not over 8 hours and especially not over three films (and three years). It just can’t sustain it so there is a point about half way in when you have to ask whats the point of this and why am I watching it? As the films stand now it’s never clear until the very end.

I like FIVE ARMIES. I think the film shows the promise of what the films could have been (The second half is on my best of the year list). But the fact that the film is so good, especially in the final half makes the flaws of the first two films all the more glaring. Seeing the compact nature of this film you realize how wrong Peter Jackson went.  The series is a major let down compared to the LOTR.  While it's nowhere near as bad as the Star Wars prequels (they killed all my feeling for every feeling for all of  Star Wars inside me) the films are less a companion to the original series, rather they are more a footnote.

Maybe some day I'll go back and try the trilogy again, but for now, for me, I've been to Middle Earth, I don't need to go back and if I do want to go I'll hitch a ride with Frodo on the road to Mordor.
----
THE INTERVIEW has sadly become a cause, Sony caved in to terrorists because they were hacked, though more recently it became clear it was because theater owners caved because they didn't want problems.  Which makes me think George Clooney is right, put the film out on VOD. (Though some have intimated that the release of film would result in more emails Sony and Hollywood really don't want released)

I don't have much to say other than I'm extremely cynical about the whole fiasco,not for a rights reason, rather I see it as an effort to make money. The film is a big deal now and has more publicity then it would have otherwise. I know we'll see the film soon. Outside of the DAY THE CLOWN CRIED buried films rarely stay buried and show up somewhere. I don't in my heart of hearts think this is real threat to anything other than Sony's wallet and if there was going to be trouble it would have been because a lone nut job did something.

Many people are now unhappy with the incident in part because it seems to mean a lessening of freedoms but more because its the wrong film to be fighting for. I know that some times you have to take the small fights to make the big fights winnable, but in the eyes of some they bemoan that we're defending what is being called by the reviewers who saw it a bad low brow comedy.

For me the freedom has to be stood up for where ever its threatened- basically a lot of times you can't pick your battles (especially with a Hollywood hype machine behind it pushing things to be bigger so that they can get extra PR so they'll make a mint on the first weekend of release when it hits theaters or VOD).  They should have just released the film.

Weighing in on the issue with better turns of phrase are Unseen family members Alec and Hubert.

Alec weighs in at his regular base Flixist.
Hubert's editorial is up at Ruby Hornet
----
And now Randi's links
Help Get a documentary on Early animation made
Is Gone With the Wind America's strangest film?
DC Comics covers in the style of movie posters
How PES made Submarine Sandwich
The perils of an all digital movie future
Films buried by their studios
On Turkish cinema
Why are cartoon mothers frequently dead?
Movie in Jokes 2014

Our month of Criterion titles continues this week. Next week there may or may not be a nightcap-however look for the start of out five part year end wrap up with a look at the festivals we covered. Worst of the year, film finds and a two part best of the year list fill follow.
Posted by Steve Kopian at December 21, 2014