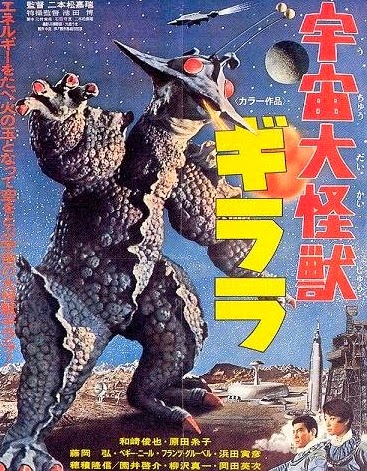 I would wonder what X FROM OUTER SPACE is doing coming from Criterion, but its not really Criterion, instead it’s from their Eclipse line and their When Horror Came to Shochiku set.

The plot of the film has aliens from space coming to earth in the form of spores and running amuck in Japan when they start to grow exponentially. A means has to be found to stop them.

I grew up on this film as a kid, watching it on the 430 movie and the various monster programs that played in the New York area. I never really remembered much about the film other than the weird looking monsters with the odd antennae.

Looking back at the film for the first time in a long time I find its an okay film. While not the best Giant Monster film, it’s not the worst either. The highlights clearly are the destructions scenes which are nicely not the same old same old that you got from Toho and the Godzilla films.

As middle of the road as I am about the film I have several friends who love this film. They love that it’s a standalone and that there is nothing else like it…or was a standalone until about in 2008 a belated and intentional comedic sequel came out that had the X creature taking on the G8 conference that film from MONSTER X STRIKES BACK didn’t work for me and despite a great cast that included Takashi Kitano, it just fell flat
Posted by Steve Kopian at December 21, 2014