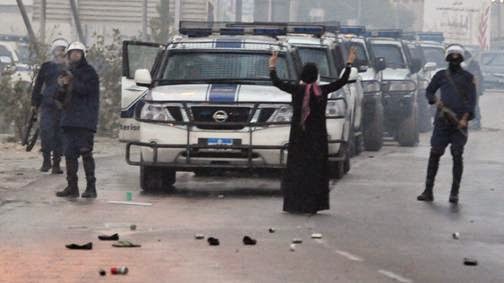 WE ARE THE GIANT is Greg Barker's look at various facets of the Arab Spring uprisings, in Libya, Bahrain and Syria. The film looks at six people- a father and son who fought in Libya, two Syrian brothers who tried to keep the revolution non violent and two sisters trying to change things in Bahrain. At the same time the film seeks to ties these revolutions to those in the past by showing clips,photos and statements of leaders of other revolutions through the centuries.

The film is very flashy especially in the linking material which tries a bit too hard to make all revolutionaries brothers and bolster it's point by trying it into a larger global revolutionary movement. Thats all well and good, but at the same time its a tad messy since it seems to say the revolutions as part of some grand movement, which they may be but not in the way they are portrayed here. In a weird way if this film was made a couple of decades back this film would undoubtedly be seen as Communist propaganda, whichit isn't because of inclusion of Che and Lenin in the linking material.

Before I can talk about WE ARE THE GIANT further I have to say something about the very large gorilla that is sitting in the room. It’s nothing really bad but it’s something that very much will affect how you react to the film. I know it affected me, in that it took me three weeks of trying to get to a place where I could give the film a fair shake. The problem is that as good as the film is, and it is very good, if you’ve seen a number of films on the Arab Spring protests and/or some of the other protest documentaries that have come out of late WE ARE THE GIANT will seem like it’s been there and done that- which it really isn’t.

You’ll forgive me for getting that out in the open, but the film is good enough for me to not tell you that my feelings for the film kept by getting colored by outside forces. I would hope that you know that as much as I try to take each film head on, but there are times, like this, where seeing as many films as I do is a detriment. I have to put it out there since it was a factor in my feelings, and I want you to adjust upward the quality of the film if you haven’t seen as many similar films as I have.

Basically this is a case of  what place you come in being seen affecting how you are perceived- even if you could really be the best in show.

For me  seeing WE WARE THE GIANT was a tough haul. It took me three weeks and four tries to get all the way through it. This isn't anything I haven't seen before. Other than the sisters being in Bahrain, there is nothing here that I haven't run across in the last 18 months on numerous occasions. From POINT AND SHOOT to SILVERED WATER,SYRIA SELF PORTRAIT to any number of films on the Egyptian revolution,  I've seen variations on the theme before.  This doesn't mean  the film is bad, only that if you've seen more than a few films on the revolutions in Arab countries you're going to be disappointed. You've seen similar things before.

I like WE ARE THE GIANT, but I wish I had seen it first so that I wouldn't have compared other films to it.

The film opens Friday in New York.
Posted by Steve Kopian at December 08, 2014