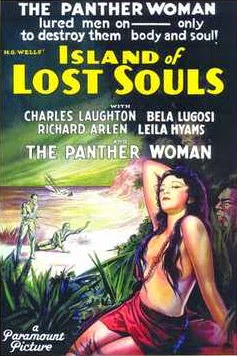 What can you say that the film was banned in England for about 40 years doesn’t? If that isn’t a ringing endorsement I don’t know what is.

Based on HG Wells The Island of Dr Moreau, Lost Souls has a shipwreck survivor arriving on Moreau’s island and encountering the weird beasts that the good doctor has been making in his lab. Of course it all goes wrong soon after. Yea you know the story, its been ripped off and riffed any number of times (there are at least 2 official big screen remakes and probably two hundred unofficial ones) but this is the grand daddy, this is the one that kicks you in the ass and hangs with you.

The film works for any number reasons, the great cast (Charles Laughton and Bela Lugosi), the intelligent script and of course the dark brooding cinematography. Say what you want about the films many pleasures chief amongst them is the dark look of the film. It looks more like a half remembered dream or a nightmare partly revealed in the edges of the darkness. The look seems to be something that we should not be seeing. It warms its way back into the psyche and sits there an pollutes your thoughts for days.

The film is so disturbing it was the last straw for the British authorities who banned the film and then effectively banned horror films by the creation of the horror certificate. They were not going to have those sort of nightmares inflicted on its populous. The result was horror film production around the world, and particularly the US was curtailed since there simply was no market for horror.

Od course time marched on the real world horrors out paced cinemas with the result horror films came back in vogue-though Lost Souls remainded banned at least in England.

I love this movie. Its creepy as all hell and is a must see, especially in Criterions remaster.
Posted by Steve Kopian at December 18, 2014