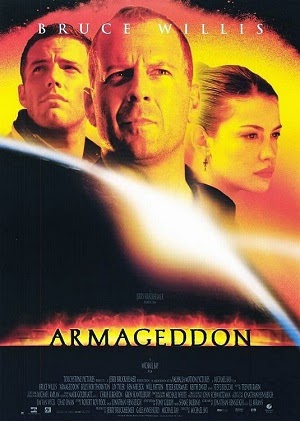 An asteroid is coming to earth and no one except Bruce Willis and Ben Affleck can stop it.

Michael Bay’s blockbuster strangely got the Criterion treatment (as did his film the Rock) which confused the hell out of cineastes everywhere. God love Criterion for their weird turns.

Armageddon, the more upbeat of the end of the world films that filled the summer of 1998 is a lot of fun. The other film, Deep Impact, might be dramatically better but was depressing as all hell since it ends with the world ending. No one I know wanted to see it for that reason, and those that did didn’t want to see it a second time. That wasn’t the case with Bay’s film which follows the tropes and cliches of the disaster movie genre with wild abandon. It was completely engineered to be please and it does.

I hear you groaning. I hear a lot of you groaning about this film. First it was that it existed and then it was because it was put out by Criterion. Now its that I’m bringing it up again.

Oh yea groan all you want this clunky collection of stock characters out to save the world is a great deal of fun. Is it high art? Oh hell no. its just manly men going into pace while real women wait on earth for the manly men to come home. It big and loud and pure turn your brain off spectacle. On that level it’s a great deal of fun.

You’ll notice my saying it’s a fun a lot because that’s what it is. That’s where it begins and ends. If you don’t like it lump it and go watch some pained Bergman film again.

On the other hand if you want a popcorn movie you can both enjoy for itself and make fun of Armageddon fits the bill.
Posted by Steve Kopian at December 23, 2014