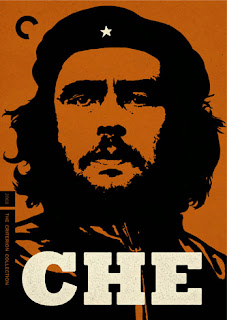 My anecdotal story concerning Che is from the New York Film Festival. The year it played was the year that it wasn’t at Alice Tully Hall and all of the screenings were at the Ziegfeld. My friend Lou and I were chomping at the bit to go see the film but by the time we were ordering tickets we found that the only seats available were in the front row all the way to the left. Not wanting to sit up close and to the left for over four hours we passed…only to go home and find the film was playing on VOD on cable. Curling up the couch we plopped down and watched it.

I know the reaction to Che was largely mixed. Some people loved it, some people hated it. The only thing that anyone agreed on was that Benecito Del Toro deserved at least an Oscar nomination. The film barely played theaters (as two separate films) and made no money becoming something of a legendary flop. The flopping didn’t stop Criterion from putting out a huge deluxe set which is really cool and which I still haven’t gone all the way through.

The film, or is it films?, is something daunting. A four hour and five minute look at Che Guevara at two points in time. The first probably at the height of his celebrity and the other is at the end of his life when he is once more in the bush and being hunted. The two parts can be seen as two separate films (as I said they were released as two separate films) since the aspect ratio and cinematic style for both films is completely different. However you really can’t see just one film and really get the whole story. Actually I don’t think you get a complete story even from the two parts but I’ll come back to that. The two films kind of act as an echo to each other with themes and ideas crossing back and forth between the two parts.

How exactly they fit together isn’t exactly clear or easily explained, and I think this is what has kept the film in the fringes. Yes the film has a big name director in Steven Soderbergh and a big star in Del Toro, but the film isn’t easy- it tells not so much the life of Che, but it simply illustrates two key moments in his life. And on top of everything else this is a four plus hour film from an American director that’s in Spanish. American audiences may be willing to watch foreign films in another language but they are prejudiced against an American film being that way.

I’ve seen Che more than a couple of times and to be honest I’m not sure what I make of it. It’s a frequently gripping film that for all its flaws haunts me. What is exactly that Soderbergh wants me to feel.? Yes I know I could listen to his commentary but at the same time films must stand on their own. We shouldn’t have to have them explained to us. We shouldn’t need cheat sheets.

On the other hand if you just watch the films in close proximity they get your brain going. You begin to think about them and how they fit together and you become more engaged than if you just sit and watch the films and had it all explained to.  If you feel tht a great film engages you you on a bigger level than just having it wash over you then this is a film for you.