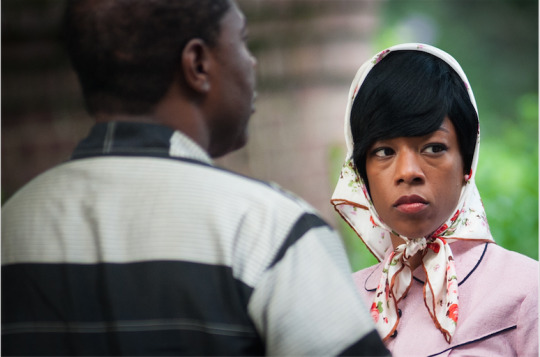 Fictional account of the lives of  several witnesses who didn't help Kitty Genovese when she was killed in Kew Gardens in 1964 is a film that is destined to get lost because it has the misfortune to be tied to the real life case for no really good reason.

I'm really torn about this film. On one hand it's a pretty good slice of life, but on the other hand it's reason for being, an examination of why people didn't help Kitty Genovese is flawed because the event that makes up the climax of the film is now largely rewritten to the point that the much quoted New York Times article is debunked. This means that if anyone has read on the case and recent turns of events or saw the recent film  THE WITNESS is going to have a tough time going with the film to where it wants to go.

To be honest Puk Grasten has made a film that operates as a very good drama of life in 1960's  Kew Gardens. Its a solid portrait of different people in different social classes getting by in a neighborhood as the world was changing around them.. On that level, which is all before the tragedy the film works pretty good.

The problem is that Grasten either didn't know or didn't care that recent investigations and a feature documentary has effectively rewritten the story of what happened. 37 people didn't stand by they interceded where they could and made multiple calls to the police. People didn't stand by and watch her die. Knowing that makes watching the film very difficult if not impossible since what is supposed to be an examination of the "truth" is an examination of a myth.

I would love to ask Grasten if she knew she was a making a film that was historically inaccurate or at least problematic. I'm guessing she probably didn't since at some point she would have to defend points that are impossible to defend except if she had fictionalized everything and never mentioned Genovese in her promotional material...then again that's the hook that's going to put butts in seats, without that this may never have gotten picked up- though to be honest the film is good enough that it should have and probably would have.

On the other hand I'm guessing most people don't know that the story the film is based on is a lie so she maybe okay in the end. I however, need a film that is supposed o be an examination of a true event actually be about something that happened.

While the film is well made and well acted, I can not in good conscious recommend the film because what the film is is about is historically inaccurate and an affront to the people who tried to help and who are only now, 50 years later getting their reputations back.

The film opens in theaters and VOD tomorrow.
Posted by Steve Kopian at October 06, 2016