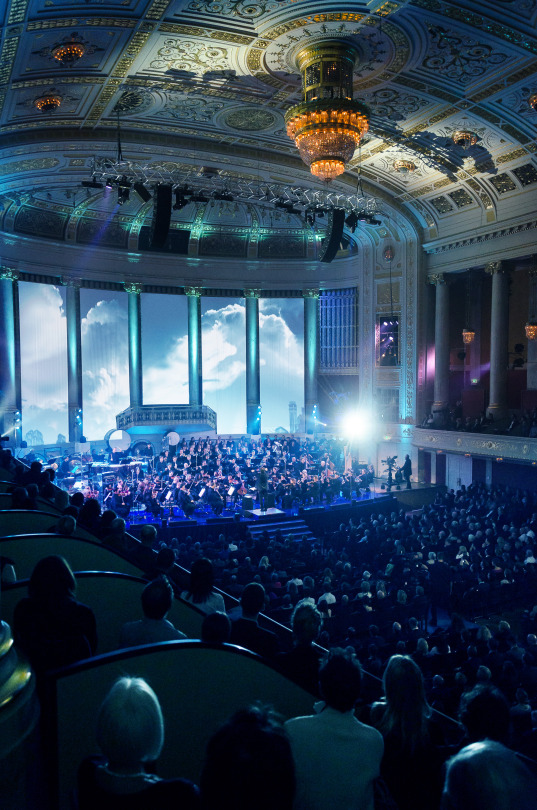 I received this press release in my email a couple of days ago and thought it sounded really neat so I'm sharing it with you.

Vienna and Los Angeles, Oct 3, 2016:
On Oct. 14, 2016 the THE SECRET LIFE OF PETS, the 2016 released animation film will come to life again in the historic Vienna Concert Hall (Wiener Konzerthaus), where Oscar, BAFTA, Golden Globe and Grammy winning film composer Alexandre Desplat takes over the baton to conduct the Vienna Radio Symphony Orchestra.

In the course of the “Hollywood in Vienna” gala, which is broadcast on TV to 36 countries, Desplat will receive the prestigious Max Steiner Film Music Achievement Award, presented by the City of Vienna. Desplat will be the 8th composer after John Barry, Howard Shore, Alan Silvestri, Lalo Schifrin, James Horner, Randy Newman and James Newton Howard to receive the Viennese award.

“Hollywood in Vienna” announced concert world premieres of Desplat’s scores to THE SECRET LIFE OF PETS, ARGO, JULIE & JULIA, LUST & CAUTION and the song “Still Dream” from RISE OF THE GUARDIANS.

For the performance of the Academy Award-winning film music to THE GRAND BUDAPEST HOTEL the Swiss yodeler of the soundtrack, Ruedi Roth, will perform together with his Yodeling-Group, joined by a Russian ensemble with Balalaikas, Mandolin Players, Russian Dancers, a Male Choir and the Vienna Radio Symphony Orchestra.

Derya Türkan, the original musician who performed the Kemenche for ARGO will perform together with a Viennese oriental ensemble. Plus, German Pop and R&B singer Grace Capristro will perform the song “Still Dream” from the Dreamworks movie RISE OF THE GUARDIANS.
Further beautiful Desplat scores that will be performed during the Award Gala include THE GRAND BUDAPEST HOTEL, The Girl With a Pearl Earring, the Imitation Game, The Ghost Writer, Godzilla and Harry Potter.

Performers from the USA, Russia, Great Britain, Germany, Austria, France, Italy, Turkey and from Iran will appear at the concert.

The Hollywood in Vienna Gala will be performed by the world-class ORF Radio Symphony Orchestra, conducted by Keith Lockhart, chief conductor of the Boston Pops.

Alexandre Desplat will also give a Master-Class and talk with Q+A for composers and students at the respected University of Music and Performing Arts Vienna during the International Film Music Symposium Vienna (FIMU Vienna) on Oct 13 and Oct 14: www.fimuvienna.com

Hollywood in Vienna was founded in 2007 by Sandra Tomek (Tomek Productions). The symphonic gala concert celebrates classic and current masterpieces of film music. During the course of the gala concert, the City of Vienna awards one of today’s leading film music composers with the Max Steiner Film Music Achievement Award. The Viennese composer Max Steiner belongs to the most influential pioneers in the history of Hollywood movies and scored all-time classics like King Kong, Gone with the Wind and Casablanca. The award is meant to be a symbol of recognition for exceptional achievements in the art of film music.
For more information please visit: http://www.hollywoodinvienna.com/

Email ThisBlogThis!Share to TwitterShare to FacebookShare to Pinterest
Labels: Hollywood in Vienna