To be perfectly honest I bought tickets to the surprise screening of JACKIE as a goof. I could do it so I did it, I didn't want to really see it, but I figured it would be a way of hanging out and talking movies. Worse came to worse I could sell them and be done with it.

I didn't sell them instead I did go, with my friend Nora. I'm not sure either of us had high expectations for the film, but we bought the ticket and took the ride... and when it was done we both were shocked at how good the film really is. I think it's easily one of the best films at the New York Film Festival, and probably one of the best of the year-  as far as award bait films go and the whole year.

Set a week after the funeral of her husband JACKIE is a psychological portrait of Jackie Kennedy in the wake of the assassination. Based on an interview she gave to one of her friends the film delves into what she may have been thinking, feeling and doing. The events depicted are based on interviews, letters and recently released documents that put us into the head-space of the former First Lady.

All of the talk going into the film concerned Natalie Portman's performance as Jackie. The attention is being thrown her way because the film is all her. She is in almost every scene and every shot. She carries  the film. I know that some people who have never heard Jackie speak are going to be bothered by her cadences but if you look at the TV White House that forms part of the film, you'll quickly realize how right on Portman is. While she gets the voice right she also gets the soul right- or seems to. Here is a woman in mourning, who has fallen from the top of the pyramid and is now trying to find her way. Under normal circumstances it would be tough but as she is simply trying to process she is being paraded out for the cameras, plan a funeral and be removed from her home because the next president wants to move in. Its a masterful performance and will get Portman her next Oscar nomination. 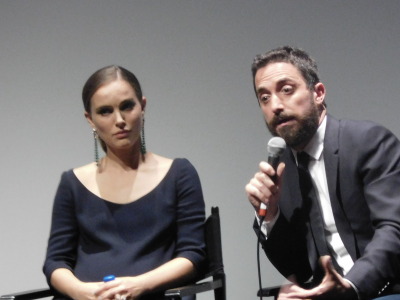 The rest of the cast is equally good with everyone disappearing into their roles pretty much completely.  I particularly loved John Hurt as a priest Jackie talks to. I don't believe it's based on anyone in particular but he is as good spiritual figure as I've see on screen in a very long time.

While I was initially not  in love with the film, somewhere about 15 minutes in the film clicked for me. I understood what it was doing  and how it was doing it and I fell under it's spell. What I loved was that despite the obvious music cues and emotional manipulation it sucks you in and makes you feel what Jackie (or this version of her at least) is feeling. The film's tricks hook you and drag you along and make you go "yea this is what it must have been like". Its masterful filmmaking. Another thing that I loved is that the film never gets into gossip territory. The film doesn't throw brickbats at the Kennedys or the Johnsons or anyone. The film remains steadfastly a portrait of a woman in mourning and how she shaped history.

Highly touted for Portman's performance if nothing else, JACKIE is exactly the sort of film that should be playing at the New York Film Festival. In a year where many of the highest praised films at the festival fizzled or disappointed JACKIE transcended the norm and was something truly special. Here is a film that has all the bells and whistles and uses them to pack an emotional wallop.

To be honest there is much to say about the film and it's explorations of public and private life, of it's look at the forging of history and of the very human story of mourning but I really don't feel like discussing them. Frankly what I want to do is just sit back and enjoy the fact that JACKIE hit it out of the park and then some. I'm sure that  many people will be writing up the thematic elements and historical significance of the film. Let them. Me I'd rather just sit back and relax an ponder the film and occasionally mumble "Damn that's a good film" because sometimes that says it all.

Absolutely one of the best films at the New York Film Festival and a must see when the film opens December 2. 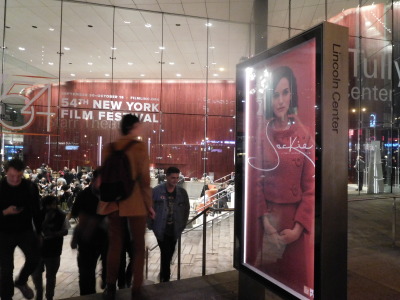