Monster aka The Horrible Dr Crimmen aka El Monstruo Resucitado (1953) 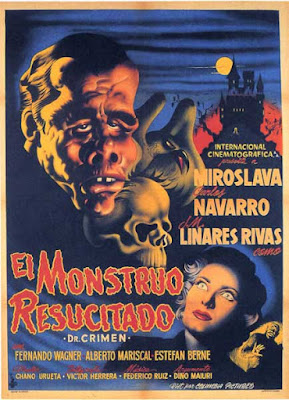 Intriguing if not always successful horror film from Mexico is a weird mix of Frankenstein and Phantom of the Opera.

A reporter answers a lonely hearts and meets a brilliant but disfigured plastic surgeon. They seem to hit it off,but when the doctor overhears a conversation suggesting the affection he was shown was less than honest he flips out and vows to get revenge. He attempts to using the body of a recently deceased and extremely handsome presidential candidate to get revenge.

If you can get past the cheapness, the frequent rear projection and mixed effect makeup then you're going to have a pretty good time. An atypical in construction horror tale is in large part a romantic soap opera and it makes for a rather dream like film. There is something about the music and the claustrophobic and carefully constructed images that makes this film rather eerie.

The film isn't perfect, it can be extremely clunky at times, but at at the same time it's one of those footnote films that any lover of horror films really should take a look at.
Posted by Steve Kopian at October 23, 2016