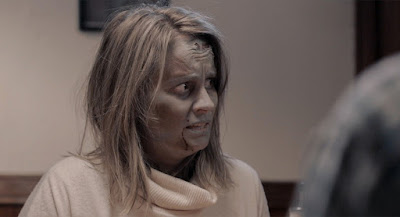 Subtitled in English and filmed almost entirely in the zombie language AMERICAN ZOMBIE is a hoot and a half. Its a gross out comedy about a zombie family dinner and what happens when Dad brings home some live ones (it's more organic and healthier)

Beautifully made, perfectly balanced this is what a horror/comedy short should be. This is is one of the best horror shorts I've seen in a long while, managing to be gross, funny and deeply thoughtful. As a satire of American family life it's dead on (no pun intended.)

Here's to hoping that everyone connected with this film goes off and makes lots of big budget films just as good as this short - just so long as they never ever try to expand this into a feature film because they will wreck the perfection of this film.